By GLENN ASTARITA
August 10, 2015
Sign in to view read count 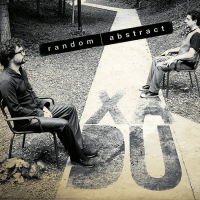 The duo entered the studio without the services of talented bassist Bernat Hernandez who performed with the musicians on Resolution (Moonjune, 2014). But drummer Xavi Reija's booming, robust and well-defined bass drum pulses often compensate, along with guitarist Dusan Jevtovic's polyphonic voicings that steer the melodically tinged works into dark progressive metal passageways and sonic dreamscapes, laced with ghostly electronics effects. And it must be noted that the pristine audio characteristics tender the utmost detail on a per-track basis.

The title track "Random Abstract," is modeled with Jevtovic's death metal crunch chords, fancy fretwork and his partner's budding drum patterns as they incite notions of a forthcoming Apocalypse along with some crafty noise-shaping episodes. However, the duo improvises quite often and doesn't sit on one particular groove, whether they indulge in some good old straight-four rockers or employ some grit and grizzle amid an array of fireworks and the drummer's peppery, up-tempo polyrhythmic beats.

Jevtovic uses his EFX pedals to great effect while dishing out a diverse tonal stew via harmonious passages and ostinato developments that offer a few mesmeric forays into the netherworld. During certain movements the musicians execute steely-edged and fractured funk themes, and generate an imposing jazz-fusion workout on "Workplace." The musicians also go toe-to- toe but don't strangle themselves with a hodgepodge of technical blowouts or incessant soloing escapades. Elsewhere, Jevtovic's droning notes and avant-garde expressionism instills a 360-degree shift in strategy. As a whole, it's an entrancing and focused venture produced with the audience in mind, and not just a trial and error type practice session by any stretch of the imagination.

Secrets; Random Abstract; Decaying Sky; New Pop; Something In Between; Deep Ocean; Place With A View; Workplace; No Hope.