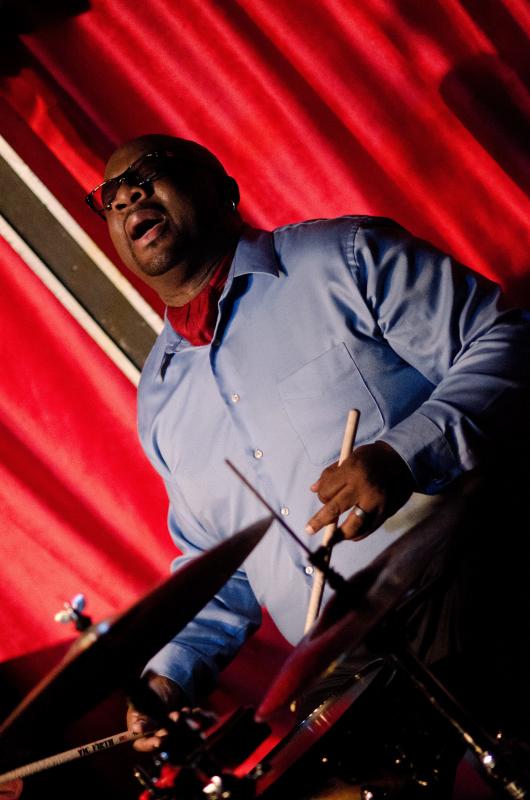 With the official CD release happening just the day before, there was a good deal of buzz surrounding a Saturday evening performance in Cleveland featuring drummer Ralph Peterson and his new trio. In fact, the tables were packed in tightly and a bursting crowd had gathered for the evening. Although already established in Latin jazz circles, pianist Zaccai Curtis and bassist Luques Curtis might have been unfamiliar to many who came out to see the powerhouse drummer. Nonetheless, by the end of the night, it would become evident that these youngsters have the chops and credibility to take it to the next level. In turn, Peterson seemed inspired by the pair's presence and alluded that this would become a working trio if he had any say about it.

Sticking close to the order of the CD for the first set, the trio launched into Walter Davis, Jr.'s "Uranus" with a reckless abandon that would set the mark for the rest of the evening. The first thing this reviewer noticed was that although Ralph was using a modest four-piece kit was smaller-sized drums, there was a huge rush of sound that seemed to envelop the entire room. Add to that Ralph's clever use of jam blocks, cowbell, and jingle attachment and you get a sense of the wide palate Peterson used to interact with his bandmates.

The lovely Sam Rivers' line "Beatrice" would only peek its familiar head out after an opening that borrowed directly from Coltrane's "Syeeda's Song Flute." Zaccai would spill out line upon line of mellifluous beauty spurred on by Ralph's tasty brush work and occasional chortle. Another Walter Davis piece, "Backgammon," upped the ante in terms of Peterson's intensity. His lengthy solo covered lots of ground, most noticeably a triplet figure around the drum kit that is a favorite lick of Roy Haynes.

Rounding out the first set was the 5/4 clave that boosted the already substantial Joe Henderson bauble "Inner Urge" to new heights and the surprise appearance of Ralph as trumpeter. Acknowledging a couple in the audience celebrating their 50th wedding anniversary, Peterson stepped forward with his horn and delivered several transcendent choruses of "Stella by Starlight." By the time the last cymbal crash of "The Art of War" had faded, an hour and a half had quickly passed and many assumed that the performance was over, only to be told that a second set would be on the menu after a short break.

If the first set was just an appetizer, one could only speculate on the main course that lie ahead. Indeed, Peterson seemed inclined to challenge himself and push his sideman to deliver the goods. The first three numbers would cover much ground, starting with the New Orleans second-line groove set upon Monk's "Bemsha Swing." During his statement, Zaccai would fire off some 16th note triplets that brought a vocal response from the audience, followed by a Peterson solo complete with a quote of Monk's "Green Chimneys" on the toms.

Next up were stops down Latin Lane and Brazil Boulevard, speaking figuratively. On both numbers, Ralph managed to utilize all the parts of his drum kit to sound like a full percussion ensemble. Therein lies to the totality of his skills. Adapting to any style, Ralph is the complete musician. Rounding out another lengthy set, some quiet moments were to be found in the beautiful Zaccai Curtis original "Moments." This would be followed up by "Blues for Cooch," an up-tempo 18-bar blues that inspired Ralph to hand off his sticks to a musician in the audience so that he could dabble a bit further on his trumpet.

After the show, Zaccai would comment to this reviewer that the second set was unlike anything they had tried before. Clearly, Ralph was feeling the vibe of the evening and wanted to push his new trio, just like his mentors had done with him back at his start. It was a wonderful thing to witness and the truest example of the power of this music. Here's hoping we hear more of this trio in the years to come.