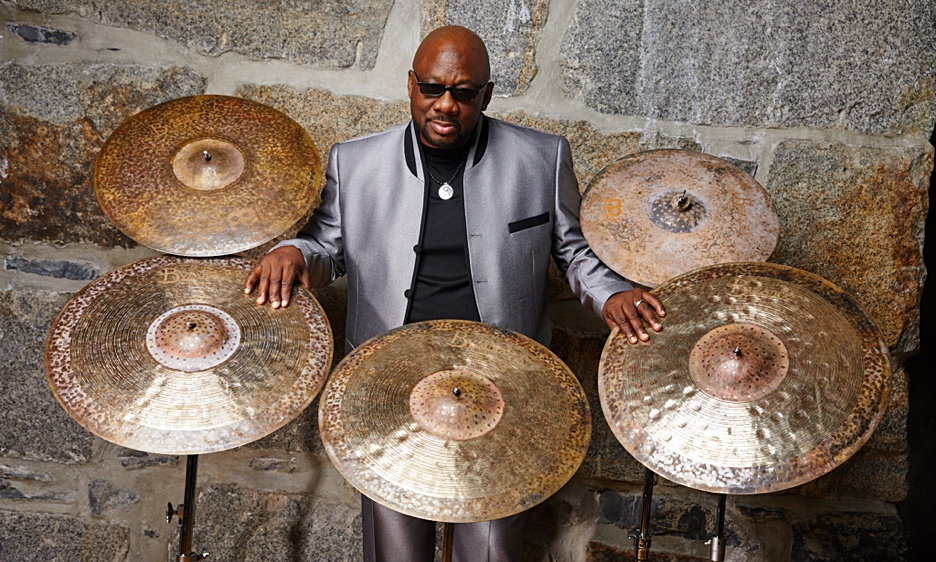 Drumming is as natural to me as breathing. —Ralph Peterson

Drummer Ralph Peterson has been on the jazz scene for some 35 years or more, carving out a career as a performer and an educator that would be the envy of many. His main influence is the legendary Art Blakey, and Peterson has been a standard bearer for that music and that style for some time.

It's not his only thing though. He's played with Walter Davis, David Murray, Stanley Turrentine, Craig Harris, Henry Threadgill, Michael Brecker, Betty Carter and many more, bring his exquisite touch and chops to the proceedings each time.

"It's a broad spectrum. I'm gratified by the variety," says Peterson. "I was never a camp follower. In the '80s, 90 percent of the jazz musicians my age talked a certain way, behaved a certain way, dressed a certain way and only dealt with that way. I tried to have my feet in as many musical camps as possible."

And his appreciation for Blakey is reverential. He even performed with a big band led by Blakey, also known as Buhaina, or just Bu, to many of his friends. Peterson came out this year with a double CD recording—Legacy Alive: Volume 6 at the Side Door-that is scintillating. The musicians are first-rate, all with connections to Blakey: tenor saxophonist Bill Pierce, alto saxophonist Bobby Watson, trumpeter Brian Lynch, pianist Geoffrey Keezer and bassist Essiet Essiet. The members of the sextet play their asses off, in the hard bop style of Blakey. Amassing them was easy. "I didn't ever got the proposition completely out before all of them said, to a man, 'I'm in.'"

"The reaction has been amazing," says Peterson. We recorded the album in October 2018. We've been working every month and I'm booked out until May or June of 2020 already. It's an idea who's time has come, for sure. I'm grateful for the opportunity to be the standard bearer for his cause. Because his cause is my cause. My cause is built on his cause. The scaffolding of who I am is the foundation, the stones are people like Art Blakey and Walter Davis."

And last year, he recorded I Remember Bu with his students at the Berklee College of Music in Boston, where he has taught for 18 years. The band, the Gen-Next Big Band, placed second in the recent Downbeat poll in the category of Rising Star Big Band. "That ain't no college band," he says with pride. "We were just at the D.C. Jazz festival and people did not see us coming. We hit them in the head. And it was great."

Peterson says the sextet album "was really kind of eye-opening, not surprising, but remarkable. We're finding out how much people are really appreciating this particular sound, the Jazz Messengers sound." Some groups today, with multiple horns, "their vocabulary is more rooted in the modern. Certainly built on the sound of the jazz Messengers. But that three-horn sound of the Jazz Messengers and that approach to soloing, the dynamics, and playing backgrounds and all of those things are something that people are realizing is a rare thing. You can take it for granted and forget about the impact of it while its gone. But if somebody stirs it up again, you begin to appreciate that particular flavor or sound."

Blakey, he says, is important to each person in the band. "I'm a Jazz Messenger like everyone else. Art had that mentoring, patriarchal, parenting type of relationship with pretty much everyone that worked in the band."

But there's more to Peterson than, leading various bands, like his Fo'Tet years ago and still doing hip sideman gigs and teaching at the collegiate level for 32 years. Peterson is battling cancer. Severe cancer. And his strength of will and upbeat approach to life and his music is astounding. Beyond remarkable. In a conversation of about 40 minutes. It was at the tail end he even revealed this situation, in a totally unfazed fashion that was akin to, "oh yeah, there's also this."

"Through this battle I've been having with the big C, the college [Berklee] has been amazing I'm so grateful. For all that they did to support what I'm trying to do. Things are going great musically, off the bandstand, academically, socially. I'm training. I'm taking care of whatever body I've got left. I'm not focused on what it is that might take me out, I'm just addressing it. I've had four cancer surgeries in the last three and a half years. Stage 4 liver cancer. It's now in my lymph nodes and is trying to advance on my lungs. We just started a new chemo which we will believe will be successful in repairing the lesions that just appeared on my lungs.

The thing he's most excited about is a second big band for Gen-Next is already in the can. And on YouTube, he says, is the first-ever 360 virtual reality video. "If you have an Oculus, definitely watch it with your Oculus on. It wraps the music and the imagery all around. If you don't sit down, you'll fall over. It's amazing. I'm excited about being on the front end of that technology, and that was all due to the support of the college."

In his home town of Pleasantville, N.J., Peterson's father played drums and an uncle played drums. His grandfather played cymbals in the church. He has since gotten possession of them and is trying to reconfigure them so they can be used on modern cymbal stands. He was holding sticks and playing at about the age of three. "Drumming is as natural to me as breathing."

But it's not the only instrument he played. He learned to read music playing the trumpet as a youngster. "I've been playing professionally since I was 14 or 15. I had a funk band. I'm not a jazz baby. I always make it a point to say that for those people who think all jazz musicians come from places like New Orleans and Chicago or Kansas City. We don't. Some come from little places like Pleasantville, caught in between Philadelphia and New York ... Though New Jersey has a proud and rich music tradition for music in general and jazz specifically. From Count Basie to Wayne Shorter. Queen Latifah. Bruce Springsteen. There's all kinds of music represented. Cozy Cole. Woody Shaw. A lot of bad cats are from Jersey."

He had a group in high school called Black Spirit. "That was my first attempt of transcriptions. Earth Wind & Fire. The Commodores, the Ohio Players. That's the kind of shit I was throwing out. Then I played baritone in a band with the uncle of drummer John Lamkin... Everybody who was anybody in Atlantic City and South Jersey played in this band. The name was Cosmic Nirvana."

Another of his groups was the Vanguard Jazz Ensembles that included the outstanding trumpeter Terence Blanchard. "Not long after that, Terence got the gig with Lionel Hampton and then with Blakey," says Peterson.

After high school, Peterson wanted to continue pursuing the drums. But he failed the percussion audition as a freshman at Rutgers University, where he was to study with noted drummer and educator Michael Carvin.

"I wasn't prepared. He told me you can't get into a college-level English course without knowing the 26 letters of the alphabet. So go learn the 26 rudiments and learn something about reading rhythm before you come back and try to get into college," he recalls. "It was a powerful experience, because it was one of the first important 'No' that I received. I was somewhat of an athlete and somewhat of a musical natural. So I didn't hear the word 'no' very often. I could keep people focused on what I could do, to keep them from seeing what I couldn't do. He was the first guy to pull all the covers off my shit. I love him for that. He'll always be my teacher because of that. I came back the next semester loaded for bear and we got to work."

His friend Blanchard left school and was working, and Peterson told Carvin it was his intention to leave school and move to New York City. There was another awakening from Carvin.

"He told me, 'You can do that shit if you want to, but you better not let me see you on the bandstand.' I asked what he was talking about. He said, 'I'll whup your ass and then I'm going to hold you down and call your father until he gets to New York so he can whup your ass.' I said, 'Why are you doing this?' He said, 'Because it's not your time. If you go now, you'll be in Smitty's time (young drummer Marvin "Smitty" Smith) and Tain's time (another youngster at the time, Jeff "Tain" Watts). You'll be jumping the gun, based on impatience. Finish school. Things happen in cycles for a reason.'"

"He was absolutely right. I don't know if I trusted him so much or was afraid of him. He was quite the imposing figure. It's funny that I kind of hold that relationship with some of my students. It's a beautiful thing. They come to support me in my health challenges. They show up at the hospital and at the house. They help me move things. It's amazing, the relationship. It leaves me confident about the future. These kids can write, they can play."

When it came to meeting Blakey, Peterson took a cautious approach, going to a lot of Jazz Messenger gigs and observing. When it came time, he was ready.

"The two-drummer big band goes back to at least the late '70s. In fact, the original Jazz Messengers was a big band. Horace Silver and Art Blakey started the big band together. Art Blakey and Horace Silver and the 17 Messengers. That evolved into the Jazz Messengers, as Horace established his own voice as a leader and Art maintained the Messengers. Through the years there have always been opportunities for young drummers to sit in at rehearsals. Even sit in on the gig. Since I knew that, I worked hard in the '80s to prepare myself for the opportunity."

His friend Blanchard was the trumpet player and Peterson went to as many gigs as he could. "One night at the Jazz Forum on Bleecker Street, New York, Art came off the bandstand and patted me on the shoulder on his way past, just as an acknowledgment of my presence. I would sit right up front and I would be glued to what he was doing. He let me know, 'I've seen your face before.' That kind of thing."