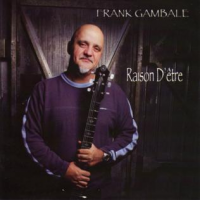 Guitarists are a funny lot; so many of them, not content with the harmonic/intervallic potentials of standard guitar tuning, experiment with a myriad of alternate tunings, sometimes with the expressed purpose of emulating the kind of chromatic chordal capabilities of the piano. As if there isn't enough to explore with the standard instrument, they feel a burning need to reinvent its harmonic capabilities, and that's not necessarily a bad thing. Take fusion-burner Frank Gambale who, with his Neauveau Tuning, has reinvigorated his playing and, with Raison D'etre , his solo career.

While Gambale has always been known for monster chops, harmonic sophistication and a breadth of tone that separates him from some of his contemporaries, his recent albums, while never short of technically impressive, have become somewhat samey. Well, all that has changed—almost. From the opening finger-picked arpeggios of "Foreign Country," which sounds like Allan Holdsworth meets the Dixie Dregs, you know something different is going on. Sure, the legato lines are there, and the burning solo tone; what is new are the voicings made possible by his new tuning, the capability to play chords with a chromatic closeness. And with these new harmonic possibilities open up a fresh new approach to soloing. Gambale has, quite simply, never sounded this good.

And if it isn't enough that Gambale has a whole new direction to give his sound a freshness that distinguishes him from the plethora of fusion guitarists, there's his pick of bandmates. Gambale has been touring with drummer Billy Cobham recently, and it's clear that they understand each other. Cobham delivers some of his best powerhouse drumming in years, from mind-boggling solos to navigating unusual time signatures with the sense of ease that comes from spending time with the progenitors of irregular metered fusion, The Mahavishnu Orchestra. The latter half of "Complex Emotions" sounds, in fact, as if it was lifted from the glory days of the Orchestra and given a contemporary facelift. Ric Fierabracci and Steve Billman, who share bass duties, work well with Cobham, providing rock solid support as well as strong counterpoint to some of Gambale's mind-warping elliptical melodies.

But the real revelation here is Gambale, who, with a new harmonic concept, brings new validity to that dirtiest of words, fusion. Grooves abound, as do chops, but none of it seems superfluous or excessive. Gambale seems more concerned, this time around, with solos that are more about thematic development and not just about displays of blinding technique. With his newly-created pianistic harmonic sensibility Gambale joins Allan Holdsworth in the upper echelons of guitar fusion; like Holdsworth, he will be often imitated but never copied. Fans of fusion will love Raison D'etre , and fusion naysayers would do well to return their attention to Gambale; he has truly reinvented himself, and the result is an album that is never less than captivating, intelligent, moving and impressive.