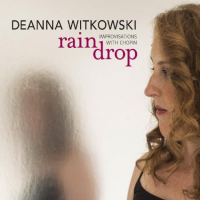 Pianist Deanna Witkowski is a truly versatile artist and consummate musician. Her superb forays into sacred music in a jazz framework, for instance, are captivating in their free flowing spirituality and her subtly adventurous category defying explorations thrill in their spontaneity and their imagination.

On her fifth release, the intimate Raindrop she goes solo in interpreting and embellishing eight of polish composer Frederic Chopin's deeply emotive pieces. She elegantly peppers these with fragments of Bossa Nova and other standards and punctuates the entire album with series of short and poignant improvisations. The result is a uniquely satisfying disc that, instead of being a superficial fusion of genres, is a multifaceted, crystalline set that showcases their common essence.

The dramatic nature of "Prelude In E-Flat Minor, Op. 28, No. 14" allows Witkowski the use of thick, percussive chords with which she builds her intriguing elaborations. Her provocative circular phrases wind tightly around the original motif and maintain its melodic nature.

In addition to Brazilian songs Witkowski utilizes well-known show tunes in her singular approach to performing Chopin's opus. She infuses the darkly expressive "Etude In E-Flat Minor, Op. 10, No. 6," for instance, with "You And The Night And The Music"'s exquisite lyricism. She fills the space between the haunting and expectant progressing refrains with her evocative and intelligent pianism. This brilliantly executed track is one of the highlights of this uniformly superlative recording.

Not all of the pieces that comprise the CD are in a minor key. Her tender take on "Nocturne In E-Flat Major, Op. 9, No. 2" introduces brightly sparkling tones and a ragtime inspired cadence. Elsewhere, on the energetic "Nocturne In B Major, Op. 9, No. 3": bluesy hints speckle her engaging performance and her charmingly lithe acrobatics.

Her own, brief extemporizations are equally captivating. The lullaby like simplicity of "Finding Joy" bellies its understated brilliance. The melancholic and hypnotic "Walking The Labyrinth" delights in multilayered pastel hues. Meanwhile the incandescent "Light That Shimmers" brims with intricately constructed poetry.

Raindrop demonstrates Witkowski's one of a kind style at its most mature. Playing unaccompanied and doing away with vocals helps shine the spotlight on her sophisticated piano technique and her refined instrumental creativity. The result is an intelligent work of ethereal grace that enamors and fascinates.