The Black Butterflies: Rainbows For Ramon 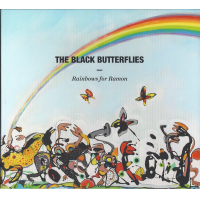 The Black Butterflies' debut, 1 De Mayo (Self Produced, 2010), introduced an ensemble that found beauty in brashness and an all-inclusive recipe for musical creation. The group found its way by liberally mixing free jazz, Latin music, blues, John Coltrane-like spiritualism, primal urges and strong rhythmic elements, giving their music a sense of raw immediacy that's lacking in so many of today's shiny, overly-polished bands.

The architect of this ensemble is Mercedes Figueras, an Argentinean-born saxophonist who came to New York with nothing more than her saxophones and determination. Over the course of her four-and-a-half-years stateside (and counting), Figueras has played subways, tackled Afrobeat with the Drumadics, recorded an album of freely improvised duets with drummer Martin Visconti, taken to the streets with drummer Kenny Wollesen's Himalayas and taken a seat in Karl Berger's Improvisers Orchestra. Her broad-toned blowing—which can become gorgeously gritty and slightly tart on command—is the antithesis of the academia-made saxophonist sound that's so prevalent in today's players; she possesses an unmistakable sonic identity.

The Black Butterflies' sophomore effort continues to build on the melting pot aesthetic that underscored its debut. The band moves from animal-driven anarchy ("Intro To The 3 Monkeys") to sunny melodies ("The 3 Monkeys") without batting an eye, making less-than-normal transitions seem commonplace. Galloping grooves lead to group-based vocals ("Rainbows For Ramon"), glimmering and gorgeous sounds ("Wind Chimes") butt up against the bold and brazen ("Lumkili"), and Gershwin slowly roams through a climate dripping with humidity and percussive dressings ("Summertime"). Figueras comes across as a free-blowing firebrand when walking in the footsteps of saxophonist Pharoah Sanders ("Lumkili") or engages in cutting dialogue with saxophonist Tony Larokko, but she's also a gifted sculptor of melody.

This album, on the whole, has a more mature outlook than its predecessor, but retains the anything-is-possible joie de vivre that made that record so powerful. Berger, who was absent on the debut, comes onboard here and brings a sense of balance and warmth to the frontline with his winning vibraphone work. Cleaner production values and the substitution of pianist Levi Barcourt, who paints within the lines, for Dan Tepfer, who proved to be more of an outside thinker on the prior release, help to give the music greater definition.

Rainbows For Ramon is a spirited, colorful outing that's built on a love for music of all shapes and sizes; it's a rainbow of musical expressions, if ever there was one.