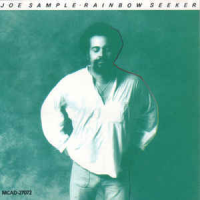 If you don't know what "pocket" is, listen to most any Joe Sample release, but especially Rainbow Seeker (1978, MCA). You'd think the term was invented for this collection of groove jazz. Of course when released, I'm sure it wasn't considered ground-breaking, but it is an incredible example of how compositions and solos can be built around the pocket. Unfortunately, my copy of the disc doesn't tell me who's playing on the tracks, so I gleaned the album personnel info from an online source:

The ensemble, on each track, is tight! Joe is playing a bit more here than he has on recent releases, but his fluid, swinging soloing technique is in evidence. I'd instantly recognize the soloing as Sample's. Sticking with electric and acoustic pianos, he works his magic on a variety of tempos and grooves contrasted by the latin-tinged "Islands in the Rain," and the balladry of "Melodies of Love," "Together We'll find A Way." There's some tasteful and stylish archtop guitar in there, overall the classic 70's effected sounds are all there, and it grooves, grooves, grooves from top to bottom. It's not amazing that you can here Sample's influence on much of today's contemporary (NAC and the like) jazz styles. What does amaze me is that few players actually credit Sample for inspiration. If you're listening Joe, I'd love to get a chance for a lesson or two on how to Sample.

A fan? Sure I am—of all of the players mentioned here. Much of my own technique and compositions are influence by Sample's, Grolnick's, and Scofield's. These are players who have been around 20-30 years making albums and moving their music and the genre forward. While there are few musical icons like Miles, there are plenty of examples of players who have gone somewhere with their music. Though I was disappointed when Scofield did his quartet albums in the late '80s (I had been a funk fan), he has gone on and continues to establish new options. Joe Sample will always sound like Joe Sample to me, but his recent acoustic trio stuff is exceptional. I saw him live with the trio and he held the audience in awe even after following the much larger band of Boney James. What does that tell us? And, of course, Sanborn. I've had a love/hate relationship with his music, but it is undeniable and unrestrainable, and enduring. No one else is Sanborn in the same way no one else can ever be Miles.