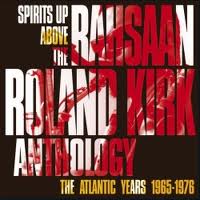 He was as funky as singer James Brown. With three horns in his mouth, he sounded like the entire JB reed section. And onstage, with a truckload of instruments around his neck, he was the hardest working man in jazz business. Saxophonist, flautist, clarinetist and multiple custom-reed instrumentalist Rahsaan Roland Kirk (1936-77) livened up the music scene like few other artists before or since.

Blind since early childhood, Kirk started out as an R&B tenor player. He recorded his first album, Third Dimension (King) in 1956, and spent a short while in bassist Charles Mingus' band. By 1960, when he released his second disc, Introducing Roland Kirk (Chess), he was recording and performing almost exclusively under his own name. Along the way, Kirk acquired an array of exotic reed instruments—the best known being the stritch, a straightened-out alto saxophone, and the manzello, a soprano saxophone customized with a mellophone bell—and learnt to blow three instruments at the same time, creating a drone on one while fingering the others with one hand apiece. He mastered circular breathing, which allowed him to play sustained chords beneath his top line. His vocalized flute style was picked up widely by jazz and rock musicians.

The 22-track collection, sequenced more or less chronologically, follows Kirk's trajectory from a neo-bar walking tenor saxophonist ("Making Love After Hours" and "Roots" from Here Comes the Whistleman), into a more ambitious, but no less compelling, composer and player, beginning with 1967's "Inflated Tear." Many of Kirk's most celebrated tracks are included, along with a couple of dogs—"Portrait of Those Beautiful Ladies" and "Freaks For the Festival" from 1975's The Case of the Three-Sided Dream in Audio Color, an unfortunate attempt to buff up the music for the emergent jazz-funk audience.

Initially derided by "serious" jazz critics, who thought he belonged in a carnival side show, Kirk ultimately won over most skeptics. He was an experimentalist hardwired into blues and gospel roots, an incandescent soloist, and a supreme entertainer. He was also an articulate supporter of the black and civil rights movement. He just about had it all—and his music still sends shivers up the spine 35 years after his death.

Tracks: CD1: Making Love After Hours; Roots; The Black and Crazy Blues; The Inflated Tear; Lovellevelliloqui; Lady's Blues; Volunteered Slavery; Spirits Up Above; A Tribute to John Coltrane; Medley; Something for Trane That Trane Could Have Said; Ain't No Sunshine; Blacknuss. CD2: Do Nothing' Till You Hear From Me; Carney and Begard Place; Seasons (One Mind Winter, Summer, Ninth Ghost); Pedal Up; Anysha; Three for the Festival; Portrait of Those Beautiful Ladies; Freaks for the Festival; Serenade to a Cuckoo.