Pran: Raga for the Rainy Season 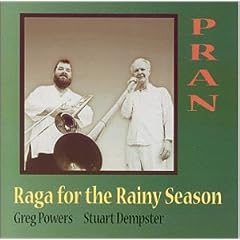 Unless you're really into esoteric music, you've never heard an Indian raga played by a trombonist and brass didjeriduist. Of this I am nearly certain. Well, Greg Powers (tb) and Stuart Dempster (bd) put their minds together to do just that. Powers handles the melody, and Dempster delivers the drone. The name Pran refers to the "vital enlivening breath" and bears relevance to both the instruments and the music. The particular raga on this recording originated in the 16th century and was meant to be played in (you guessed it) the rainy season.

The first two sections of the raga formally specify statements of melody alone, then melody with more of a rhythmic component. These slow and sparse parts might be more appropriate for meditation or insomnia treatment instead of concentrated listening. The third section, however, takes a severe left turn as improvisation emerges and the dynamic range of the music rises dramatically. Here we hear Powers bringing his jazz roots to bear on an essentially Indian theme. It's just another unusual combination, pulled off with panache. And you'd be surprised how interesting that drone of Dempster's can be.