By DAN MCCLENAGHAN
August 10, 2011
Sign in to view read count 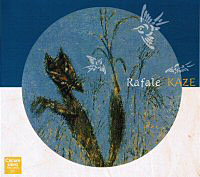 It's no easy task keeping track of the bands under the baton of pianist Satoko Fujii. The prolific avant-garde artist from Japan leads numerous ensembles, including four distinct big bands and multiple quartets and trios, in addition to co-leading duo outings with her husband, trumpeter Natsuki Tamura, very notably on the marvelous Chun (Libra, 2008). She seems to put together at least one new ensemble per year, and in 2011 it's Kaze, a quartet featuring her musical soul mate Tamura, and a pair of adventurous cohorts, French drummer Peter Orins and trumpeter Christian Pruvost.

Adventure is always the key with Fujii. Classically trained, she abandoned that structured musical world to explore her own vision, a mixture of avant-garde jazz and modern classical, rock and folk music and freewheeling improvised sounds. Rafale captures a 2010 concert from Krakow, Poland, that served as a celebration of the bicentennial of Polish composer Frédéric Chopin's birth. The set opens with the Tamura-penned "Noise Chopin," and does, indeed, open with "noise"—the whining creak of Tamura's trumpet sounding like the movement of a rusty hinge, the swinging open of an aged door. The sound evolves, as Tamura is joined by Pruvost, into a power tool serenade that moves into a military march when Orins rolls into the mix. Five minutes in, Fujii's piano makes its appearance, a brief miasma of a collective interlude that gives way to a spacious trumpet/percussion section, leading to a delicately beautiful solo piano movement.

That's the way it is with Kaze's music: twists and turns, noise followed by lyrical beauty; nuanced percussion followed by powerhouse drumming; and wild cacophonies that lead into introspective solo slots. Expect the unexpected.

Orins contributes three tunes to the set. "Anagramme" opens with dry trumpet chatter—the song of a parched bird—underlain by an electric hum. Fujii's piano comes in on a ruminative note, drawing Orins in for a section with a very structured feel.

Fujii's "The Thaw" features the pianist at her most lyrical, with a dry trumpet breeze fluttering over her piano, while "Blast" begins with what sounds like a big, sizzling piece of electronics—a large screen TV, perhaps—short circuiting toward an explosion. After a brief reign of chaos, structure gels, then breaks apart in spectacular fashion, that big screen TV blown to smithereens.

Fujii's Rafale is, ultimately, a stimulating experience for open ears.