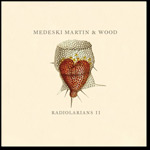 Notwithstanding the noir ambience of the closing cut, a piano jazz trio reading of "Baby Let Me Follow You Down," Radiolarians II assaults more than it insinuates. As such, the basis of Medeski Martin and Wood's long-term concept—road-testing new original material prior to recording it in the studio—manifests its virtues more readily here than on its first installment.

Far from the brisk but cerebral likes of its predecessor, this second edition features more than just a dollop or two of pure aggression. The threesome temper their attack with the comfort of the groove, but that's not to say this is a sequel to Shack-man (Gramavision, 1996)—Medeski's Hammond is prominent only near the end of "Amish Pintxos"—or that tracks like "Flat Tire" don't find MMW demonstrating its unusual uncanny grasp of dynamics. The hammering of bass and percussion gives way to Medeski's comparatively mellifluous acoustic piano, the main motif of the album in general, and the transition is almost jarring.

It's the first of a series of such abrupt instances. The quick syncopation at the end of "Flat Tire" maintains some familiarity, not to mention the sense the trio has fine-tuned this music, but not to the point of sterility. Radiolarians II boasts a self-sufficiency that informs the music with novelty in the best sense, so that hearing Wood use the bass bow is an apt alternative to an outside string section that might not be so directly in tune with himself and his band mates.

The inspired logic extends to the album as a whole, not just within individual tracks. The sequencing of the 10 cuts is such that "ijiji" is a cushion—at least to some extent—from the dizzying momentum of earlier tracks. "Dollar Pants" is deceptively simple and deliciously so. With the spoken word interludes wafting in and out of the multiple keyboards, percussion and bass, "Chasen vs. Suribachi" suggests more vividly than any other track just how artfully MMW is retooling its aesthetic—and, thereby, reinventing itself as a band with its Radiolarians series of recordings.