By BRUCE LINDSAY
December 26, 2011
Sign in to view read count 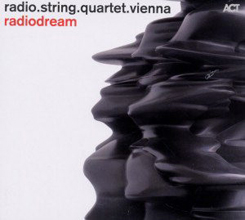 Ah, a string quartet. Calm, gentle—if rather derivative—music may well await. But there's a short verse on the inside cover of radiodream, the closing line of which serves as a fair warning about much of the music that actually awaits: "you can only escape while you are awake." radio.string.quartet.vienna is a band that not only wishes to play with the basic rules of grammar and punctuation; it also wants to play with the imagery of dreams and, for much of the time on this album, it's the visions from the darker realms of sleep that are the band's subject matter. A string quartet it may well be, but there is nothing derivative here, and for every calm and gentle moment there is one of mystery and even fear.

radio.string.quartet.vienna's previous ACT Music releases include covers of John McLaughlin's work (on 2007's Celebrating The Mahavishnu Orchestra) and collaborations with Swedish singer Rigmor Gustaffson on 2010's Calling You and Austrian accordionist Klaus Paier on Radiotree (2008). But this is a band determined to develop and take chances, and familiarity with its previous releases will give little insight into the music on radiodream.

The quartet creates an ethereal, otherworldly mood with its traditional lineup of two violins, viola and cello. Occasional vocals from violinist/main writer Bernie Mallinger and transistor radio noise add to the strangeness of this atmosphere. The musicians are capable of threatening power and nightmarish, dystopian imagery. Mallinger's "Traffic To The Dolphin" sweeps effortlessly between the two; his "Saint Paul's Nightmare" is indeed nightmarish; and the quartet's take on "Strange Fruit" is barely recognizable, yet still portrays the horror of Lewis Allen's original poem. Even Henry Mancini's delightful "Moon River" is somehow discomforting, although it stays close to the familiar melody.

Given the often nightmarish soundscapes of radiodream, the inclusion of Radiohead's "Nice Dream" might be seen as ironic. But radio.string.quartet.vienna proves to be eminently capable of balancing light and dark, it's just not easy to predict when the band will shift between the two. Mallinger's "Streets..." is brief but beautiful, while cellist Asja Valcic's "One Night In Vienna" has a majestic grace that serves to showcase the quartet's power and virtuosity. "I Loves You, Porgy" is lovely, but heartbreakingly so.

radiodream may not always be a comfortable listening experience, but it is always a fascinating one, as radio.string.quartet.vienna moves the string quartet into exciting new places.

Inception; Song--Ode an den Freud; Liebestraum; Traffic To The Dolphin; Nice Dream; Strange Fruit; Streets... ; ... Of Memories; Moon River; One Night In Vienna; Saint Paul's Nightmare; Lonely Night; Dream Caused By The Flight Of A Bee Around A Pomegranate A Second Before Awakening; Extraction / I Loves You, Porgy.