By JEFF WINBUSH
February 1, 2009
Sign in to view read count 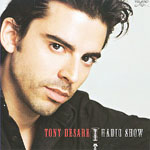 At a time when, for all intents and purposes, radio has ceased to be the breeding ground for new talent, Tony DeSare's Radio Show takes a long and loving look back at its golden age. It's more than a little ironic that, with the timidly restrictive formats of many radio stations, Radio Show will find it tough to find listeners in the medium it celebrates.

There isn't much demand for crooners these days, but a good singer will always be in style, and DeSare is in fine voice. If Billy Joel were a jazz vocalist instead of a working man's rock n' roller, he'd be Tony DeSare. DeSare lacks Joel's talent for the hook, but shares with the pop star a strong voice and an underrated piano style. The choice of material here goes from the familiar to the unexpected, with varying degrees of success.

It might be expected to hear standards like "Get Happy" on a DeSare album, but his arrangement of the Philip Bailey/Phil Collins hit "Easy Lover" is pleasantly off-the-wall, as he slows the tempo down so that it swings instead of grooves.

Radio Show is as close jazz comes to a concept album, similar in intent to Yes' Tales from Topographic Oceans (Atlantic, 1973) or Pink Floyd's The Wall (Columbia, 1979). But DeSare keeps the proceedings light for the most part, with former Saturday Night Live alumnus Joe Piscopo providing the disc jockey chatter between songs.

How does a jazz vocalist pay homage to rock n' roll and rhythm n' blues? If you're DeSare, you turn Chuck Berry's "Johnny B. Goode" into a boogie-woogie piano rave, and then turn around and play it straight with a version of "Halleujah, I Love Her So" that would undoubtedly please Ray Charles himself.

Bob Dylan's "The Times They Are A-Changin'" is preceded by sound samples of the Vietnam War, Malcolm X, and civil unrest, but strains too hard for seriousness. Following the Dylan tune with a draggy original, "A Stranger's Eyes," saps some of the life out of Radio Show. Far superior to that slight diversion into pretentiousness is DeSare's duet with Jane Monheit, "Bizarre Love Triangle." It's a perfect slice of pop music goodness, and if some brave program director gave it a shot, it could become a hit.

DeSare has always possessed the vocal ability to break out big-time, but the ambitions of this album clearly demonstrate his growth and confidence as a musician, writer and bandleader as well.

By looking back nostalgically, Radio Show provides proof that DeSare is an artist standing on the verge of breaking out to a wider audience—and deserving of it as well.

Radio Show Intro; Get Happy; Hello Friends; A Little Bit Closer; Spinnin' Stacks o' Wax; Bizarre Love Triangle; All or Nothing at All; Lazy River; Playin' Some Really Heavy Hits; Easy Lover; To Touch a Woman; We Got a Dedication; Johnny B Goode; We Interrupts This Broadcast; The Times They Are A-Changin'; The Power of Music; A Stranger's Eyes; Hallelujah I Love Her So; Don't Forget to Keep Dreamin'; Dreaming My Life Away; Goodnight; Prelude; Fade to White.