By MARTIN GLADU
September 5, 2007
Sign in to view read count 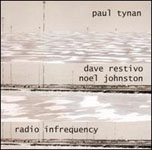 Throughout its successive waves of colonization, the foggy, Gulf-streamed shores of Nova Scotia, Canada have welcomed and fostered diverse musical cultures. Indeed, its French, Celtic and British musicological melting pot coalesced into a unique microcosm sometime during the 19th century. Yet, unlike their Scandinavian counterparts, local jazz musicians diverged en masse from this fertile heritage, opting instead for the lyrical melodies and lush, modal chords of Wayne Shorter, Tom Harrell and, especially, Kenny Wheeler. Unsurprisingly, (and for our great enjoyment) flugelhornist Paul Tynan's indebtedness to Wheeler's idiosyncratic compositional style is, indeed, quite palpable.

Maybe due to the particularly sharp light/weather changes the temperamental sea brings and their subliminal effects on inhabitants, Wheeler's quick-changing, modulated harmonies and nostalgic moods have replaced the long, diatonic lines of French Canadian-sounding reels, Highland piping and the still omnipresent (and quite extravagant) fiddling tradition.

Radio Infrequency is in the same vein as Marc Copland/John Abercrombie/Kenny Wheeler's That's For Sure (Challenge, 2001) and fellow Nova Scotian guitarist Roy Patterson's On A Cloud (Unity, 1999), with Tynan's sensitive compositions leaving an airy impression but not at the expense of vertical density. That said, heightened by the reduced instrumentation and the program's non-optimal pacing, a certain unidimensional quality surfaces. While this minor imperfection in no way diminishes Tynan's obvious tunesmith talent and top-notch soloing, it does become noticeable upon repeated listening.

For example, the repeated pattern of a twenty-second solo intro followed by a transposed thematic exposition/development heard in the last three tracks—which also have almost identical descending motifs and tempi—does sound more like a suite. As a matter of fact, one cannot not mention the similitude to Inland Passages (Justin Time, 1996), Patterson's five-movement suite.

It is quite safe to affirm that jazz audiences shall hear more from these three for many years to come.