By STUART BROOMER
April 7, 2010
Sign in to view read count 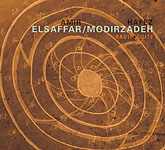 This is an illuminating meeting between musicians who share similar cultural background and creative directions. Trumpeter Amir ElSaffar is an Iraqi-American whose work has fused elements of jazz and the maqam music of Iraq. His CD-length suite from 2007, Two Rivers, was a triumph of synthesis and vision. Tenor saxophonist Hafez Modirzadeh is an older Iranian-American who has worked with jazz forms and Persian dastgah to develop his own tonal system that he dubs "chromodal," suggesting perhaps the "harmolodics" of Ornette Coleman, with whom Modirzadeh has played.

Working from traditions that include modal improvisation and untempered, microtonal pitches, the co-leaders present two extended suites here, "Radif-e Kayhan" by Modirzadeh and "Copper Suite" by ElSaffar, performed with the empathetic accompaniment of bassist Mark Dresser, whose bass will suddenly rise up to sing with the horns, and drummer Alex Cline, who can move from free jazz polyrhythms to ceremonial invocation to luminous cymbal washes that add a sense of timeless, lustrous reflection. Each suite moves through a sequence of melodies with group and solo improvisations and ever-changing moods. They're often executed with a rhythmic verve that combines a loose expressiveness with almost telepathic precision, invoking not only the early Coleman quartets, but more precisely Don Cherry's brilliant suites of the mid-'60s like "Complete Communion" and "Symphony for Improvisers." There are episodes of bouncing free-bop, elegiac ballads and muezzin-like calls to prayer. There's a musical language developing here with both tonal and collective dimensions.

As impressive as ElSaffar and Modirzadeh are as soloists, it's the collocations that are most meaningful, achieving rare emotional impact as trumpet and tenor rise together to match a precise microtonal pitch or dovetail their lines in moments of collective flurry. What stands out most is the emotional depth: on ElSaffar's "Doves over Zion," the trio of trumpet, tenor and bass manage to evoke both longing and the moment of apparent union.