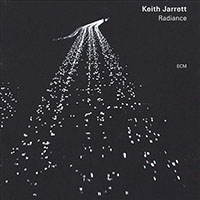 Albums like Radiance always amaze me. The intimacy of listening to an incredible and accomplished musician like Keith Jarrett shed soul for all, engaging in self-conversation, meditation, and improvisation, is undeniably where it's at. Radiance, ECM's recent two-disc release of solo material, ranks right up there with The Koln Concert, Jarrett's lauded 1975 classic.

Radiance was recorded live in 2002 during Jarrett's tour of Japan. Disc one and a third of disc two are culled from an Osaka performance, while the remainder of disc two was recorded in Tokyo three days later (ECM plans a DVD release of the complete Tokyo concert later this year). This is Jarrett's first album of solo piano improvisations since La Scala (ECM, 1997).

Unlike The Koln Concert (ECM, 1975) and some of Jarrett's other solo piano discs, Radiance is not an improvisational free-for-all. Movements hint at previous movements and preview ones to come—reminding me of Kerouac's blues ("Mexico City Blues, for starters) where ideas carry over from one poem to the next, showing the thought process at work, the thoughtful improviser on display. At times the album feels like a long conversation with an old friend—parts of it feel redundant (you'll think, "haven't I heard this before? ) but overall the excitement of hearing that old friend's voice again makes the conversation feel new.

This approach of coupling movements together as improvised "suites makes Radiance refreshing and different from other selections from Jarrett's discography. Also, Radiance couldn't have been recorded in the late seventies, along with other classic Jarrett solo sets. The playing itself is just as solid, no doubt, but Jarrett's vocabulary just seems that much broader, that much more complete, in 2002. He seems open to more impulses, making moments in his performance feel more carefree and honest.

Jarrett often leaves little break between movements, thus his audience's applause is varied, coming only when the performer rests long enough to invite it. This rapid movement from one movement to the next, one idea or inspiration to the next, shows Jarrett's range, his virtuosity really. Classical, jazz (free and/or swung), pop, Latin, and soul—all these voices speak from his hands.

Parts 3, 4, and 5 show this talent well. Part 3 showcases Jarrett's beautiful and intense lyricism, with a melody that is very '70s pop, almost like a movie soundtrack of that era. Jarrett follows this with the short, jittery abstraction of Part 4 and then immediately leaps into the frenzied playing of the following selection.

Much of the record follows at this frenzied, chaotic, and free pace, which only helps to make the mellower, melodic parts even more soothing, as when the pop melody returns on Part 8.

No stranger to the solo concert, Jarrett really seems to opens himself up on Radiance, engaging in explicit conversation with whatever guides his fingers.