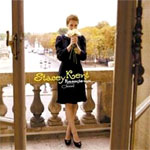 The opening tune of this set, from the winning vocalist Stacey Kent, is Jobim-Moustaki's "Les Eaux de Mars." In its English-language version, "The Waters of March," this bossa gem was well-known as the exclusive property of the late and wonderful Susannah McCorkle. Kent proves to be a worthy inheritor of it and other tunes in this all-French language album. Several tracks from the French repertory were featured on her previous recording, the fine Breakfast on the Morning Tram (Blue Note, 2007); Kent's personal connection to things French runs deep from her grandfather, with whom she spoke the language, and from her years of studying in France.

It was specifically "Jardin d'hiver," a latter day signature song of troubadour Henri Salvador, that inspired this collection. A seductive invitation to eternal pleasures, Kent's soft and gently beckoning approach is as low-key as it is irresistible. The dreamy sensuality of that tune runs through many of the others. "Mi Amor," one of several songs written specifically for her, has a pulsating and sensuous Latin flavor and Kent's way with words shines as when she wraps her piquant voice around "amor." Another charmer, "Sait-on-jamais," is the work of Camille d'Avril and Kent's saxophonist, producer and husband Jim Tomlinson, whose arrangements throughout provide a seamlessly alluring soundscape.

Amidst all of these French treasures there is tucked a bit of a surprise—Rodger and Hammerstein's "It Might As Well Be Spring," here titled "C'est La Printemps." That she has become one of the premier custodians of the American Songbook is no surprise to anyone familiar with her recordings. Here she adds another level of dreamily sensuous intimacy to this classic, ably swept along by the synchronicity of Tomlinson's warm sax behind her. Throughout Kent leans in close, with a conversational style that is as utterly refreshing as a clear, running brook.