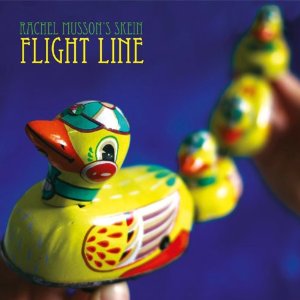 The London musicians' collective/record label F-IRE can take much of the credit for the emergence of some singular saxophonists during the early to mid-2000s: Peter Wareham (Acoustic Ladyland and Polar Bear), Mark Lockheart (Polar Bear), Finn Peters and Ingrid Laubrock being foremost among the luminaries. In 2011, another batch of reeds talent is gaining attention, led by John Martin and Rachel Musson. Martin's debut album, Dawning, presents an engagingly lyrical, new composer/player with a winning focus on rhythm. Musson, who is actually seasoned enough to have been part of the original lineup of Polar Bear, is only now stepping forward as a leader. Her debut, Flight Line, reveals another attractively lyrical composer/player, whose music is both deep and—as the cover suggests—playful, and whose robust, broken-note strewn sound, lying somewhere between Sonny Rollins and post-Tauhid (Impulse!, 1967) Pharoah Sanders, is a delight in itself.

Musson grew up in south Wales, moving to London to study music, at City University, Guildhall School of Music and Trinity College of Music. Like Martin, she has graduated from academe with technical assurance, which she wears lightly, and with soulfulness still writ large in her playing. Alongside Skein, she plays with bassist Olie Brice's quartet, a chord-less band playing music inspired by drummer Paul Motian and (laterally) pianist Carla Bley, the e17 large ensemble (the name comes from the zip code for Walthamstow, in east London, which is home to a colorful flock of jazz musicians), and a duo with Madrid-born, free improv percussionist Javier Carmona, one of two drummers in Skein.

On Flight Line, Musson fronts a quintet of prodigious young talents, which includes pianist Alycona Mick, bassist Will Collier and drummers Carmona and Josh Morrison. The two drummers, who create a powerful undercurrent of beats and textures, are one of Skein's secret weapons. Mick is the other. A talented composer herself, as the quietly spectacular Around The Sun (Audio-B, 2006) demonstrated, Mick's comping and soloing—part Thelonious Monk, part Béla Bartók, part gamelan music, part heart-on-sleeve Romantic—is a pleasure wherever it is encountered.

The album begins, resoundingly, with "It's Because Of The Sky," funky and full of vitality, on which Musson sets out her sonic stall: vocalized tones, broken notes and a preference for the middle and lower registers of the tenor. Other tunes start variously with a folkish feel ("White Ribbon," played first just by tenor and drums, and later by the full quintet), a bop-ish one ("That Reminds Me Of The Time"), hymn-like ("Swansea Town") or with fleeting, but distinct, calypso resonances ("I'm Sure This Wasn't The Plan" and "Rollin'"). The confluence of Musson's sound and echoes of calypso inevitably brings Sonny Rollins to mind (something which the title "Rollin'" hardly discourages; but with so much else going on, the thought is, perhaps, trainspotterish). Musson is center stage, or close to it, for much of the album; her flow of ideas never falters, and her sound is always to be relished.

Several of the first wave of F-IRE musicians are now officially "former members" of the collective. But as long as the organization, active since the late 1990s, can continue to champion new, or newly emergent, voices such as John Martin and Rachel Musson, its role as a mover and shaker on the British jazz scene is assured.