Dave Gisler: Rabbits on the Run

By GLENN ASTARITA
August 21, 2018
Sign in to view read count 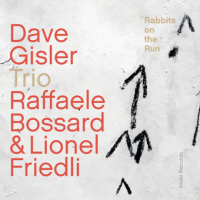 Young Swiss guitarist Dave Gisler (Christoph Irniger's Pilgrim, Weird Beard) is gradually climbing the guitar hero stairwell, reaffirmed by this captivating trio date with his prominent fellow countrymen providing the oomph and pizazz throughout. And for those who need comparisons, think of Gisler's style skirting the peripheries of Sonny Sharrock, Jimi Hendrix and Bill Frisell, along with dabs of psyche-rock. With bassist Raffaele Bossard's thumping and supple undercurrents amid drummer Lionel Friedli's power-packed beats and pummeling outbreaks, the guitarist reaps the benefits of a robust foundation for his improvisational advancements.

Gisler leads the trio through atmospherics and a program designed with varying degrees of sensitivity and angst. On "Dive," Friedli slams his drums into submission atop Bossard's monstrous lines. Here, the guitarist's zinging single note leads, tinted with distortion techniques and soaring mini-themes equate to a wily and experimental jazz rock groove. Nonetheless, Gisler is a colorist due to his gleaming sustain notes that drift into a musical abyss. Yet the band alters the soundscape during "Mr. No Name," as the guitarist's pensive, inward-looking themes and dark-toned voicings seemingly drift into the night sky.

"Rabbits on the Run" is a hyperactive free-form jam, teeming with Gisler's doomsday jaunts, although "Two Flowers" is an asymmetrical ballad, shaded by the drummer's colorful cymbals patterns. The leader's pointed phrasings are treated with echo and reverb, sparking an illusion of depth and expansion, countered by Bossard's punctuating support. Gisler is a meticulous artist who blends the rough-hewn angular licks with animated buildups and ethereal backwashes. Indeed, the artists pull no punches conveying their forthright intentions on this largely, adrenaline-charged program.