By BRUCE LINDSAY
October 3, 2010
Sign in to view read count 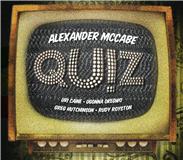 Quiz, alto saxophonist Alexander McCabe's second album as leader, appears five years after his previous release, The Round (Wamco Music, 2005). McCabe has been a member of Ray Charles' Orchestra and ska band Mephiskapheles, as well as working with jazz greats like Joe Henderson and Ray Brown. He cites tenor giants Ben Webster, John Coltrane and Sonny Rollins as influences, but it's altoists like Charlie Parker and Eric Dolphy that impact most clearly on his sound.

The overall style of the music is straight-ahead, although the tunes occasionally show a more overtly bebop influence. This is particularly the case on "Lonnegan" and "Kalido." Both tunes were recorded a year earlier than the rest of the album and feature Gregory Hutchinson on drums. Hutchinson's tight and percussive drumming is a key feature of "Lonnegan," a driving blues tune centered on McCabe's hard-edged alto playing.

McCabe contributes five original compositions. "Weezie's Waltz," which actually moves between 3/4 and 5/4 time, is a bright, cheerful tune that features some light and fluid piano from Uri Caine. "St. Pat" is the most intriguing of the five: a freer sounding tune than the rest of the album it features McCabe and Caine at their most inventive while Rudy Royston's drumming creates a real sense of movement and intensity.

The two covers—"Good Morning Heartache" and "How Little We Know"—are lovely, insistent, tunes. McCabe's version of "Good Morning Heartache" is an extended arrangement with a Bossa Nova feel that centers on McCabe's crisply-toned alto solo and Caine's contrastingly rich chordal playing. Bassist Ugonna Okegwo, who also played on The Round, adds his own solo in the closing minutes—it's a fat, rounded, sound that adds another dimension to the tune.

The sound on Quiz gives the album a real sense of a live club performance, even though all the tracks are studio recordings. With the possible exception of "St. Pat" McCabe's own compositions are pleasant rather than outstanding, but his playing is stylish and sympathetic. McCabe's band mates are talented musicians as well, and the ensemble ensures that Quiz is always enjoyable.