By MARK SULLIVAN
February 24, 2016
Sign in to view read count 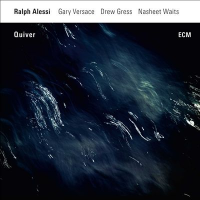 Quiver finds trumpeter Ralph Alessi and his quartet in a lyrical, reflective mood. Alessi describes the atmosphere in the recording studio as "pensive," a quality that imbues this music. The group includes most of the players from Alessi's acclaimed ECM leader debut Baida (2013). Drew Gress (double-bass) and Nasheet Waits (drums) return, with Gary Versace taking the piano chair in place of Jason Moran. Tempting to ascribe the differences between the two sessions to the pianists, but I think it has more to do with the material and the interaction of the whole band.

"Here Tomorrow" opens the set with a brief legato meditation, and the mood for much of the album is established from the start. Versace often begins the pieces with an unadorned statement of the harmony, and doesn't even take a solo until the third track, "Smooth Descent" (which is also a bit more up-tempo). "Heist" breaks the mold by opening with solo trumpet, but it makes room for another piano solo and a bass solo from team player Gress.

At almost ten minutes "Gone Today, Here Tomorrow" is the longest selection, and it too contains more moderate up-tempo music, finally giving Waits an opportunity to cut loose a bit. While there's no burning here, it certainly is not all taken at rubato or ballad tempo. "Scratch" is built upon an ostinato, following some lovely piano playing on "I to I." "Shush" combines all of the previous musical elements by beginning rubato. building to an energetic middle section, then closing with a repeating pattern.

Only the closer "Do Over" provides a large contrast, as the band plays the only really up-tempo tune in the program while Waits solos all the way through. It's far too short, and it's a shame the record doesn't contain a bit more of this kind of playing. The variety would have been welcome. But while it's a generally low-key session, it's full of beautiful playing and empathetic group interaction.