By JACK BOWERS
January 1, 2000
Sign in to view read count 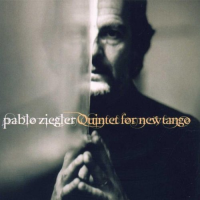 I’m no expert on the tango, but I do know that to most partisans of that Argentinean music and dance, the words “tango” and “Astor Piazzolla” are practically inseparable. The inescapable question, following Piazzolla’s passing in July 1992, was, where does the tango go from here? The answer, says pianist Pablo Ziegler, a member of Piazzolla’s last quintet (1978–88), is onward and upward, using the foundation erected by Piazzolla as the launching pad for a fresh restatement of the music in which Jazz plays a more prominent role. This “nuevo tango” is exemplifed on Ziegler’s new RCA release, Quintet for New Tango, whose Jazz component is underscored by the presence on two tracks of poll–winning tenor saxophonist Joe Lovano. Ziegler, classically trained, as was Piazzolla, has deep Jazz roots as well, having once led a Jazz–fusion trio and transcribed works by Jelly Roll Morton, Duke Ellington and others for local dance bands in Buenos Aires. Jazz improvisation, unheard of in tango before Piazzolla loosened things up, is being raised to another level by Ziegler’s quintet, whose members have far more freedom than before to express themselves within the music’s traditional parameters. At its core, however, the tango is, as it always has been, instantly recognizable as such — whatever the tempo or temperament, one would never mistake it for blues, bop or even bossa. Ziegler acknowledges and assimilates its strengths but doesn’t stop there, using them as building blocks for a fresh interpretation of the tango that honors the past while pointing toward the future. An ornate example of this forward–looking approach is the ballad “Muchacha de Boedo,” on which Lovano’s expressive tenor cloaks the music’s time–honored patterns in a luminous contemporary tapestry. Lovano’s other guest appearance, on the impulsive “Once Again . . . Milonga,” is similarly smooth and pleasurable. But what set the tango apart from other music are its slashing rhythms (sketched by bassist Hurtado and drummer Lopez) and captivating melodies (articulated by Ziegler, bandoneónist Castro and guitarist Sinesi). By putting those ingredients together in this colorful package and blending in a measure of contemporary Jazz, Ziegler has developed a winning formula. The new tango, it appears, is in every way as enchanting as the old.