By GLENN ASTARITA
December 21, 2013
Sign in to view read count 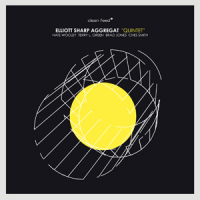 Elliott Sharp is one of New York downtown scene's more notorious affiliates, primarily heralded for his avant-garde guitar work, spanning jazz improvisation, jazz-rock, and blues-rock. He's also an accomplished reedman, evidenced on Quintet and previous ventures into the free-jazz space. Sharp once again aligns with like- minded New York-based artists, some of whom are leaders, and busy session artists. Residing within a controlled-chaos type scenario, the soloists engage in some intense duels when all hell breaks loose, but also temper the outlook with edgy, inward-looking minimalism. Sharp's brisk phrasings, tinted with vibrato and popping notes, often instigate the proceedings or generate a loosely based platform for the improvisational component.

Defined on a bustling musical environment, the quintet kicks it into tenth-gear on the scrappy and somewhat voluble "Katabatics." It's an open-forum, where much of the emphasis is placed on the frontlines' interactions and expansions with concise statements and a looping improv motif. They eventually calm the festivities down then assert a bit of fire and brimstone for the finale, as the piece "Qubits," features a motif devised on anguish and discontent atop a swarming pulse.

"Blues For Butch" is a mid-tempo blues inflected jaunt, touched with a smidgeon of expressive balladry. Yet the musicians lean towards an open-ended panorama via vivid extended note phrasings and tumultuous multipart exchanges amid a staggered flow. On the final track "Cherenkov Light (for Lol Cohxill)," Sharp pays reverence to the late British saxophonist Lol Cohxill with a low-key storyline, incited by Nate Wooley's muted trumpet lines and the band's acoustic-instrument treatments that perhaps simulate electronics processing. Otherwise, Sharp's choice of running with pieces clocking in between two and seven-minutes in length helps broaden the program's scope and elevate interest, since each composition offers dissimilar contexts and variable thematic currents.