By GLENN ASTARITA
June 1, 2000
Sign in to view read count 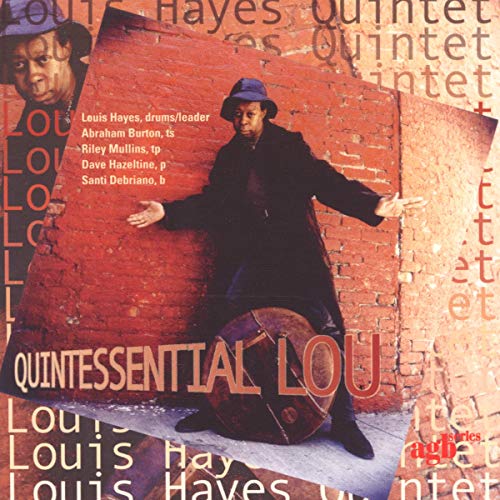 Drummer Louis Hayes might not have received an over abundance of press over the years yet most jazz aficionados should be cognizant of his past accomplishments which commenced in the 50’s while supporting saxophonist Yuseff Lateef. A true stylist and dynamic leader within the hard-bop scheme of things, Hayes has also performed with Horace Silver, Dexter Gordon, Freddie Hubbard, Gary Bartz and other jazz luminaries as the list goes on and on. However, Hayes is often cited for his ferocious, sweeping and hard driving attack behind the kit while leading his various quartets or quintets which leads us to his latest release on the fine “Montreux Jazz Label” titled, Quintessential Lou. With this new release, Hayes surges onward in the post-bop mold along with rising stars, - saxophonist Abraham Burton, trumpeter Riley Mullins, pianist David Hazeltine and the well-established bassist Santi Debriano.

The band gets to the matters at hand in a flurry on the opener and pianist James Williams’ composition titled, “Progress Report” as the musicians trade punishing fours atop Hayes rangy yet thoroughly propelling attack. Joe Zawinul’s “Mystified” is a melodic ballad, featuring the drummer’s sharp implementation of rimshots, Latin rhythms and altogether peppery support as the soloists exchange lushly melodic lines yet adhere to the context of the main themes without losing sight of the existing compositional framework. Here, the band performs smooth lines augmented by an up-front yet quietly powerful mode of execution. Tenor saxophonist Abraham Burton displays a corpulent full-bodied tone to compliment his fluid and at times Trane-ish lines on the classic, “Tenderly” as the band evolves this gem into a mid-tempo swing led by Riley Mullins’ radiant phrasing and David Hazeltine’s colorful articulations. On Kenny Drew’s composition, “Lions Den”, the musicians perform within the traditional hard-bop vein while also pursuing an airy outlook as Burton and Riley once again exhibit strong attributes as a front-line horn section while Hayes’ masterful sense of swing and polyrhythmic attack is nothing short of awe-inspiring. - Young drummers out there take note! Listen to Hayes jab and spar while maintaining the constant flow yet rarely if ever diminishing any notions of momentum via his swiftly swinging work on the ride and hi-hat cymbals.

In summary, the musicians are in top form under Hayes’ leadership as Quintessential Lou is a welcome edition to Hayes’ already impressive discography as a leader and session musician. Be kind to yourself and check out this latest release by a proven master who generally surrounds himself with his young peers!