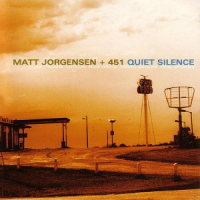 This is drummer Matt Jorgensen's second album for Seattle's Origin label - - the first The Road Begins Here was released last year. Again working in a quintet format, with Phil Sparks and Marc Seales as holdovers from the initial outing, Jorgensen addresses a set of original compositions along with a mixed set of works running from pieces by John Coltrane to Burt Bacharach. The horn players for this session are altoist Mark Taylor and tenor man Rob Davis both of whom get unconventional sounds, soothing and discordant, out of their horns on such cuts as "Tumbleweed". The horns become even more spine tingling played in tandem with Seales' Fender Rhodes on "Everything in Its Right Place", helping to set up a scenario of highly creative tension for this track. After the first three tracks I felt a certain sameness in the music setting in. While the pieces were different, they were characterized by a sense of introspection or lethargy, depending on one's mood at the time. Then comes "India" with the group letting out all the artful stops, led by Taylor and Seales. This cut simply lifts the spirits and whets the appetite for the rest of the CD, which is worth the whetting for. "The Look of Love" is appropriately romantic while "Ballad for John" is the model of a contemporary ballad, flowing, yet not predictable, with just a touch of dissonance reflecting the often dysfunctional relationships younger generations often find themselves in. The album's coda, the Lennon/McCartney "Tomorrow Never Knows" is a good example of the quiet leadership (quiet silence?) that drummer Jorgensen exhibits through the session. He manages to keep the music moving along at a good pace, without intruding on the work of his playing mates. This is an ability not often found among contemporary drum leaders. This album is another winner for Origin. You can find out more on Origin and Matt Jorgensen at www.originarts.com and http://www.mj451.com/, respectively.