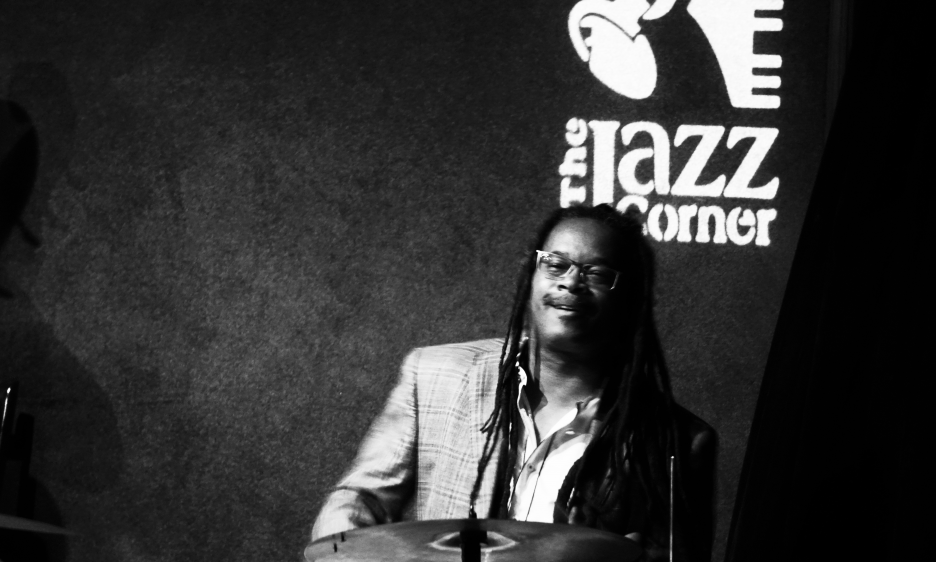 Playing his drums with the wooden rims, Quentin Baxter came to The Jazz Corner with his quintet of friends from Charleston, South Carolina. Brett Belinger led them off with a bass solo, picked up by tenor saxophonist Mark Sterbank and trumpeter Charlton Singleton in an original composition delivered in unison. Pianist Demetrius Doctor's strong solos elicited encouraging sounds and smiles from Baxter. Their second piece, Walter Gross's 1946 waltz standard "Tenderly," was re-arranged by Baxter and delivered with spang-a-lang drum styling. Singleton's trumpet solo had a tonality and softness that fit precisely with the mood.

A significant part of the first set was taken up by two of Baxter's original compositions, joined into a suite lasting around twenty minutes. The two pieces were written as an accompaniment to an exhibition of abstract art titled Art Through The Seasons (though the only two seasons in the Carolinas are the hot season and the not-so-hot season). Baxter almost always includes Gullah rhythms in his drum work. The Gullah people originate from the borderlands between Liberia and Sierra Leone in West Africa. They were enslaved and first transported to Charleston and then to the Sea Islands of the Carolinas and Georgia, where they grew the finest silky Sea Island cotton. Isolated by island life through generations, they have retained many African words and structures in their spoken language and also African rhythms in their music, which endured in the churches.

The suite didn't end when the saxophone and muted trumpet announced a conclusion. Instead, the rhythm changed as Baxter introduced a tambourine supported by the kick drum. The end actually came after the second piece was capped by Baxter leading a parade with his tambourine swinging high and Baxter hitting it hard, followed by Singleton and Sterbank picking up applause as they went between the tables and played all around the room. The original music didn't light up the room as much as the thread of joyous rhythms, carrying the music and spreading the infectious fun these musicians were having that night.