By HRAYR ATTARIAN
August 7, 2012
Sign in to view read count 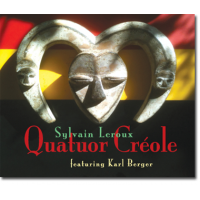 Flautist Sylvain Leroux's debut, Quatuor Créole, is an enchanting mélange of Guinean sounds, French influences and jazz inflections. In that aspect it is essentially Creole, but not necessary a work of New Orleanian or Haitian folkloric music.

Leroux plays the tambin, a West African reed flute, and a dozon ngoni, a lute from the same region—often alternating between the two on the same track. This is heard on the bluesy, hypnotic and griot (jeli)-style "Gambalou." Elsewhere, Leroux channels his inner Rahsaan Roland Kirk on "Le Message," an original composition that starts with atmospherically sparse bass notes and simple piano lines, before the fluttering melody takes off, featuring the breathy sound of Leroux's flute with his simultaneous French chant about peace and environmental harmony.

The sublime and intense camaraderie among the quartet makes "Fantasie Créole" a highlight of this otherwise solidly creative record. Drawing upon Bach and Baden Powell, the musically ambitious work starts as a melancholic fugue, with Leroux, Berger and Pavolka engaging in a mellifluous, three-way conversation. Décius backs them with his shakers and deeply resonant thrums. As the tune evolves into a Latin-tinged piano and flute dance, Pavolka and Décius lay down dark and irresistible polyrhythmic harmonies that conclude with exuberant group interplay.

The ever-evolving "Notis" best expresses the multicultural spirit that is the essence of the album, with the Levantine themes melting into African ones with dashes of Mediterranean lyricism. Far from being radically innovative, Leroux's freshman effort is, nevertheless, quite a treat for the ears and a worthy addition to the canon of the world- jazz subgenre.