By DAN MCCLENAGHAN
March 15, 2019
Sign in to view read count 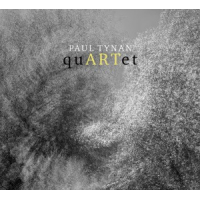 Trumpeter Paul Tynan's offering for 2019 is entitled quARTtet, emphasis on the capitalization of the embedded word "art."

Jazz recordings have a long history of pairing up with the visual arts, especially in the realm of album and CD cover images: The paintings on Charles Mingus' Mingus Ah Um (Columbia, 1959); all of pianist Dave Brubeck's "Time" recordings of the late 1950/early 1960s; and drummer Chico Hamilton's Ellington Suite (Pacific Jazz, 1958) are just smattering of early examples. Then drummer Matt Jorgensen took the concept a step further with his marvelous Tattooed By Passion: Music Inspired By The Paintings of Dale Chisman (Origin Records, 2010), setting soundscapes to each individual painting; and now we have Tynan taking the next step, obtaining images from some of his favorite visual arts, then using these works as springboards for his compositions.

With simpatico piano trio lineup accompanying Tynan's trumpet, flugelhorn and cornet, the sound runs a loose parallel to that of Polish trumpeter Tomasz Stanko's work with the Marcin Wasilewski Trio on ECM Records, with a bit more pep in its step, starting with the disc's opener, "More Than Just A Single Road," inspired by a stark image created by Jennifer Sandquist—that of ribbon of desert road rolling off to the horizon, Jackson Pollock-squiggled with a loopy weave of tar patching. The quartet drives down his road on a high speed cruise control, all component parts fully integrated.

quARTet comes with a handsome booklet that includes the images that inspired this music, along with Tynan's thoughts on the visuals and the constructions of the sounds: The ECM-ish cover art picture of a fogged-in skyscraper looming behind the shrouded glow of a street light in "It's All We Have To Offer," by Michael Barron, results in a temperate, searching sound, while Paul Vienneu's "Swirl" inspires a modernistic and softly impressionist sound in its two minute piano trio opening, until Tynan blows in and sets the loose swirl into a tighter, faster vortex of sound. "What We've Left Behind" features an abandoned and begrimed doll leaned against a stone wall beside fallen bricks, serving as one of the more melancholy pieces of the set.

With lots of different inspirations, quARTet maintains a focus of vision and a compelling cohesion as it travels through six strong compositions played by an outstanding jazz quartet.

More Than Just A Single Road; It's All We Have To Offer; Swirl; What We've Left Behind; Low Brow; Everything I Have.