By GLENN ASTARITA
August 17, 2017
Sign in to view read count 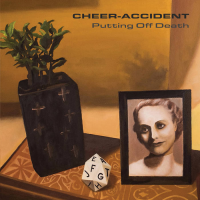 This Chicago-based prog rock unit incorporates seamless genre-hopping movements on its 18th album and third for Cuneiform Records. Clocking in at a little over 38-minutes, the musicians provide upper-tier compositions, sans any hint of filler material as opposed to cramming the maximum allowable bits and bytes into the standard CD limitations. Thankfully, each piece stands on its own via a kaleidoscopic perspective, where qualitative content serves as the nucleus of the artists' collective vision.

From a pure, comparative standpoint, this ensemble that has survived 30-years in the business cannot be easily pigeonholed, which in most instances is a good thing, since a prevailing sense of intrigue remains a constant. The band launches the festivities with a pop-like muse on the tuneful and melancholic "Language Is," as drummer Thymme Jones kicks matters in with a slow backbeat to firm up the addicting melody line and heartfelt vocals. Yet shortly afterwards, they abruptly shifts gears with an odd-metered King Crimson style motif, integrated with ominous dreamscapes. Here and throughout, the artists stitch unorthodox tonal contrasts with experimental tone poem passages and jazzy horns, creating irregular soundscapes that seed entertaining dividends.

"Falling World" commences with a synth bass line and Jeff Libersher's stinging guitar notes, treated with choir-like vocal choruses and Jones' peppery patterns. Toss in some avant-garde prog ruminations and Libersher's majestic trumpet lines with shadowy connotations and you have a composition that deviates from any one genre, but touches a nerve so to speak. Yet the following track "More and Less," begins with a contrasting platform, that features a revolving marimba-like synth pattern, deep sax phrasings and melodious vocals. Other tracks are devised with psychedelic guitar riffs, whirlwind horns arrangements, harmonious storylines and 70s style prog fare. Regardless, the musicians attain this uncanny knack for making it all seem transparent, namely from a stylistic perspective that helps formulate the band's distinct calling card.