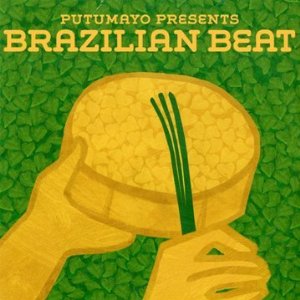 "One of the exciting things we at Putamayo do is introduce artists to people who don't know them," says Putamayo Records head Dan Storper. Brazilian Beat surveys the roots and fruits of Brazil's contemporary music, selected from Putamayo's archive of tens of thousands of global/world music pieces. "You can really hear the intersection between past and present in the music of Brazilian artists," Storper continues. "We didn't make an effort to seek it out; this is what musicians are doing. They respect their traditional music but are adding new flavors with real passion."

In the opening "Samba na Mao, Eu Tenho," Tamy's Portuguese vocal whispers so romantic and breathless that it sounds French, and finds comfort in the trumpet's coolly-blown breeze while its rhythm clicks past in modern electronics and softly strummed acoustic guitar. A magical, creamy combination of guitar, percussion and an unaffected vocal, "Ai Entao," written and performed by Michigan-born Brazilian singer-songwriter Monica de Silva, provides its counterpart; de Silva's voice proves simply perfect for the earnest beauty of her melody, and vice versa. "Minha Loucura" by BungaLove (from Rome, Italy) maintains this perfect spell with cooing female vocals, soft yet sharp guitars, and percussion that chirps like songbirds greeting the dawn—if sunrise made a noise, it would sound like this.

"Samba Ti, Samba Eu" by Brazuka Fina suggests the shadows and wonder of twilight; its vocals and Spanish guitars shine no less bright or pure, but spirits more dark and mysterious lurk in the bass line rumbling beneath.

Joao Donato's "Bananeira," rendered by the Brazilian Groove Band, thumps out the best Brazilian Beat from the jazz perspective. In this newly-discovered supergroup jam led by NYC-based Brazilian saxophonist Leo Gandelman, the drummer sets up a rock beat while Gandleman's sax leads the horn ensemble through some torrid Latin blowing, like David Sanborn jamming with Earth Wind & Fire and Pucho & His Latin Soul Brothers—simultaneously. "Bananeira" would be a highlight of any Brazilian, funk or jazz album.