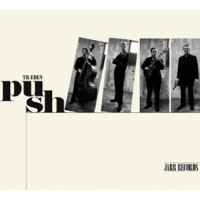 With a Danish frontline and Dutch rhythm section, Den Haag-based Træben draws much of its inspiration from the chamber jazz which came out of Los Angeles and San Francisco in the late 1950s and 1960s. Hummable melodies, cool swing, mellifluous improvisation. The whisper rises to a conversational murmer but rarely raises its voice. This is sunny, summer afternoon music.

Larsen is the chief composer, writing nine of the tunes to Ballegaard's one. He is also an amiable improviser, in a lineage which stretches from Barney Kessel to Pat Metheny (without the synths and effects), with barely a nod to Wes Montgomery. His pure, round tone and fluid single note runs have an airy vibe which is matched by Ballegaard's translucent tenor. Together, the duo suggest reed player Jimmy Giuffre's pairing with guitarist Jim Hall at the end of the 1950s, and the quartet's arrangements employ similar devices as Giuffre's: classical and folk-inspired extended forms with room for a cappella interludes, and vamps that create a moderate intensity, occasionally building to urgency.

Træben has yet to touch the ineffable heights of the Giuffre/Hall group, but Push is enjoyable enough listening. There is a certain sameness, however, which ultimately works against the album. It is for the group to decide on its direction, but it could usefully consider embracing the textural manipulations and layering possibilities modern technology offers.

However it goes about it, to reach the next level the group needs to stamp a more singular character on the music, or at least its presentation.

Top Dog; Try to Remember; God Makes Backups; Can You?; Catatraffic; All It Needs; We’ll Let You Know; Simple Things; Nothing Or Nothing At All; Mi Hijo.