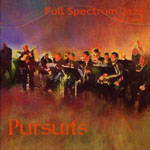 For those who may have been wondering what those high-tech nerds in California's Silicon Valley do for kicks, here's at least a partial answer. For the past ten years, a number of them have been savoring life after hours as members of the Full Spectrum Jazz big band, a businesslike ensemble devoted to exploring various facets of the music from swing to fusion, Latin to shuffle, ballads to funk, and even rap. Pursuits is FSJ's third album, and like the others, shows that these professionals take their avocation as seriously as they do their day job.

The band makes a splendid entrance, nimbly unraveling Vince Norman's fiery arrangement of Charlie Parker's "Au Privave, and follows that with a lyrical Latin charmer, "No Persigas a las Mujeres (Don't Go Chasing the Women), composed and arranged by guest music director Jon Palacios Jr. Lerner and Loewe's "Almost Like Being in Love is the first of four vocals (doubling my preferred threshold of two per big band album) by baritone Duane Lawrence, who is also heard on Jerome Kern's "The Way You Look Tonight, Sergio Mendez' "So Many Stars and Dizzy Gillespie's "A Night in Tunisia (on which he also raps). Although he does the best he can, Lawrence is a run-of-the-mill singer whose amiable personality helps mask his less than passable timing and articulation.

Even though made up of part-timers who are playing mostly for fun, Full Spectrum definitely means business when it comes to big band jazz. As listeners in the San Francisco Bay area have come to know, these gentlemen are as earnest about the music as they are about producing microchips and other high-tech gizmos. Pursuits places that ardor in the foreground for everyone to hear and appreciate.