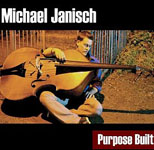 At a glance, Purpose Built, bassist Michael Janisch's debut as a leader, looks like a big-band session. The roster on the back of the CD case is not just stocked with notables, it's a long list of notables. As such, it would make sense to imagine this group arranged on risers, pinning the studio's needles as they achieve full song. However, the key to this disc is in its title. Rather than put all his talented eggs in one basket, Janisch mixes and matches personnel to create combinations that fit each composition perfectly.

On the disc-opener "Precisely Now," Janisch staffs his quintet's front line with two tenor players—Paul Booth and Walter Smith III. Fortunately, this normally-dicey strategy pays off on this driving composition, as Booth and Smith work seamlessly together while vibes player Jim Hart comps and fills underneath them. Hart's kit is a great substitute for a piano, and his mid-tune solo varies the texture beautifully. While Booth's and Smith's respective styles aren't noticeably different, they both have marvelous passion and a great sense of structure. Their three-way conversation with Hart on the close is positively thrilling.

Janisch moves between trio, quartet, and quintet configurations for most of Purpose, but the underlying intensity of the music remains constant. Aaron Goldberg's inspired piano on "Love is a Many Splendored Thing" matches Janisch's jumping trio arrangement. (Goldberg also helps channel Billy Strayhorn's darker side on the serially ominous "Blood Count.") Über-guitarist Mike Moreno expands the swath he's been cutting through the jazz world, contributing vibrant solos to the intriguing "Adelante" and the breakneck "Pukl-n-Pappo." Phil Robson may not be as adventurous as Moreno, but Robson's traditional hollow-body guitar is a natural for the Janisch original "Lost Creek" and for the spritely reboot of "Milestones." Altoist Patrick Cornelius brings serious electricity to the Miles Davis standard, then takes that energy up a notch when he joins with Smith and trumpeter Jason Palmer on "Beep," a galloping sextet piece dedicated to Janisch's late brother, composer Dave Janisch.

Two things never change on Purpose. One of them is the rhythm section. Janisch and drummer Johnathan Blake can both be considered a handful on their respective instruments, as they demonstrate repeatedly here. Together, though, they are an unstoppable force, with a mutual understanding that borders on telepathy. Blake's cymbals shoot sparks while Janisch nails the foundation on "Adelante," and they are the glue that holds the collage-like "Sofa Stomp" together. Blake also lets Janisch take his electric bass right to the edge on the two-handed coda "Moment's Notice."

The other unchanging thing is the quality of Janisch's compositions and arrangements. If smart is sexy, then Purpose is an eminently sexy effort. The session has a staggering depth of thought, filled with content-rich pieces that routinely go beyond the genre's well-worn performance framework. Hopefully there is more where Purpose Built came from, because intelligent, full-bodied music like this is what jazz needs to succeed in this new century.