By JOHN SHARPE
October 1, 2016
Sign in to view read count 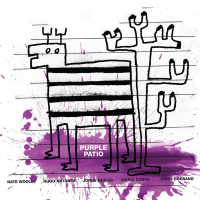 From the perspective of release dates Purple Patio can be seen as a follow up to Malus (NoBusiness Records, 2014) by the core trio of trumpeter Nate Wooley, Belgium-based Portuguese bassist Hugo Antunes and celebrated drummer Chris Corsano. But in actual fact the limited edition LP was recorded two weeks previously, presumably during the same tour. Where it differs is through the inclusion of two of the bassist's fellow countrymen in drummers in Jorge Queijo and Mario Costa. Unsurprisingly a line up sporting three trapsets creates a completely different group dynamic.

One of the masters of the modern trumpet, Wooley expresses himself in an idiosyncratic language of drones, muffled blurts and sudden clarion calls. Antunes' bass is only intermittently apparent, and takes on a subliminal quality when the drumming triplets are roiling. Once audible, he contrasts resonant notes with scratchy work at the extremes of the fingerboard and beyond. While the three drummers are clearly separated in the stereo picture, there's no indication as to who occupies which position. They work best when they show restraint.

The program consists of five selections concocted on the fly, seemingly excerpted from a studio session. Not everyone plays on all the cuts and that lends an episodic character to the proceedings. Often Wooley serves as the focal point. His trumpet stylings slither over the top of the polyrhythmic stew in "Parturition," while "Aurora" starts with bleating trumpet sustains which peter into wavering whistles, before developing into an undulating circular breathed line. But elsewhere he consciously takes a back seat, as on the second half of "Animals," where Antunes' bass is foregrounded over chiming cymbals and Wooley generates a distant background hum.

And the trumpeter doesn't participate at all on "Triangle" which features the percussive triumvirate in an exchange of textural color and fragmentary tattoos. Antunes' pulsing bass appears briefly, before the piece continues like the gradual convergence of three distant thunderstorms which never quite meet. With its urgent propulsion, "Sueca" is perhaps the pick of the bunch, as it advances in a series of explosive expositions in which the bassist's plump tones are answered by short drum flurries and Wooley's fertile combination of splutters, raspberries and swooshes.

Side A: Parturition; Aurora; Animals; Side B: Triangle; Sueca.