By DOUG COLLETTE
October 24, 2009
Sign in to view read count 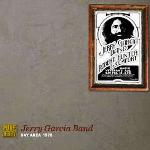 Bereft of extensive historical content (or tchotchkes such as the guitar picks that were included in previous Pure Jerry titles) this double-disc composite of four 1978 shows makes a statement solely through the music. Everyone involved in the Jerry Garcia Band lineup, including its prestigious leader, sounds deeply immersed in the group camaraderie which, in turn, enhances the live experience for the audience and the performer.

The opening "Mystery Train" is a great example of how deeply Garcia is enjoying himself as he plays and sings with a joy that joy permeates this collection of performances exhumed by archivist David Lemieux. The leader's pleasure is also infectious as there's no missing the glee in the hell-bent bass of John Kahn, who is challenged to keep up with drummer Buzz Buchanan. The presence of singer Maria Muldaur, in addition to Donna Jean Godchaux, lends a sweetness to "Catfish John" which resonates with the vulnerability in Garcia's own voice, while the guitar exchanges with pianist Keith Godchaux during the instrumental portion of the performance reflect their own intuitive compatibility.

Playing with JGB gave the leader a chance to demonstrate his "music lover's" taste for material, ranging from Bob Dylan's "Simple Twist of Fate" to Smokey Robinson's "I Second That Emotion." Garcia's not averse to relishing any given tune as fodder for improvisation—only four tracks here are less than double figures in duration. While there are glimmers of the mystery and majesty the Dead could create (Delaney and Bonnie's "Lonesome and Long Way from Home") the instrumentalists actively engage themselves in a collective effort, to develop a groove that draws as much from the melody as the rhythm: they don't just play the changes in rote fashion behind solos.

In addition to the sturdy likes of the aforementioned covers, Garcia drew on his fruitful songwriting partnership with Robert Hunter in his vivid tribute to the city of San Francisco, "Mission in the Rain," and what might be considered its corollary, "Gomorrah." Garcia's singing is not much less skilled than his playing guitar, especially on his self-composed songs, where he displays attention to phrasing that illuminates not only the word choices but the complex pattern of their combinations.

The sources of the Pure Jerry archival series aren't always so pristine in audio quality as this one (the stellar likes of which Joe Gastwirt mastered), or the level of competence and enthusiasm in the musicianship so high, but this set accurately reflects the time in which it was recorded and the level of care it was afforded in preparation for release.