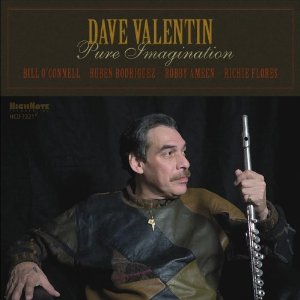 Grammy Award-winning Latin-jazz flutist Dave Valentin was the first artist signed to the now defunct GRP record label, founded by keyboardist Dave Grusin and Larry Rosen in 1978. GRP's hefty roster of jazz artists became a popular commodity, and the label was also commended for its cutting-edge analog and digital audio engineering. Thus, Valentin's flight to notoriety via his superior technique and stylistic approaches became rather legendary.

Valentin demonstrates his modern-day vision on the jazz-fusion-hued "Joy." Here, pianist Bill O'Connell uses an electric piano, presumably a Fender Rhodes, to project a scintillating overtone, abetted by a hide and seek contrast to the flutist's brisk and glistening lines. The rhythm section's sparky pulse incorporates a Latin groove but also steers the soloists through fast-paced unison choruses.

Within an assortment of ebbs, flows and strategically placed dynamics, O'Connell and Valentine delve into soaring improvisational jaunts, accented by punchy movements and changeable grooves. Featuring a diverse track mix, Pure Imagination is an appropriate title for this first-rate production via the musicians' vast synergy and enamored by the crystalline audio processing.