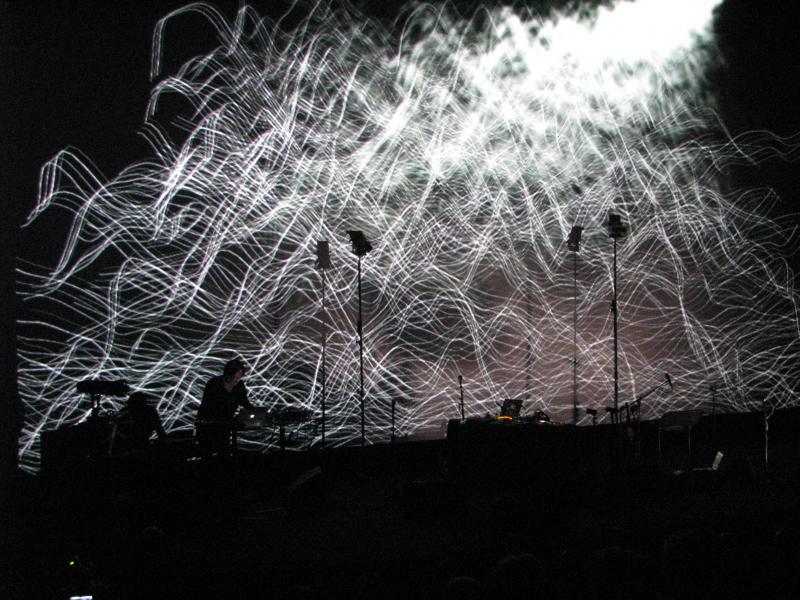 Kristiansand, home of the Annual Punkt Festival for the past decade, is a municipality situated on the southernmost point of Norway at the Skagerrag strait. It has a population of 86,000 (the greater urban area, 155,000) and is the county capital of Vest- Agder.

Crystallization of new concepts and development often take place and are given a push from the periphery, with Punkt a good and prominent example. Organized by Jan Bang and Erik Honoré, who have known each other very well from their adolescent days in Kristiansand, started The festival in 2005, carrying through and reaching the festival's 10th edition this year. To mark the anniversary, the festival invited one of music's most important artistic pioneers: American musician and performance artist Laurie Anderson.

The festival concept is centered around the concept of Live Remix. Immediately following Punkt performances, they are remixed live for the audience. The remixes work on the basis of the recorded original performance, which is reused and transformed in manifold ways. The remix can be solely electronic, but more often than not it is a combination of musicians acting in both modes, electronically and acoustically. As a small-scale festival, Punkt is artistically focused, interdisciplinary, horizontal, local and communicative.

Over the years Punkt's key element, the live remix, has had a lot of consequences. It has brought about lots of challenges, involvement in a range of interdisciplinary processes, and changes in the perception of music and its innovative effects. At certain points this has resulted in recordings like this year's Heliographs (from Erik Honorė) or, from the previous two years, Honoré and Bang's Uncommon Deities, guitarist Eivind Aarset's Dream Logic, Trumpeter Arve Henriksen's Places Of Worship and Bang's Narrative from the Subtropics. These albums are inseparable from the whole process and context of Punkt. To really get an idea of the reality of the remix and the performance and production processes it really must be experienced first hand at the yearly festival In Kristiansand -or at the smaller offshoots that have taken place at festivals in Europe and further abroad. This experience quality is a core thing, crucial in a digital era with unlimited access to oceans of recorded and stored music).

Over the years, Punkt also has served a "looking glass" function for musical developments in Norway and elsewhere. Punkt has developed its own routine(s) and grown into adulthood, but is still opening up to and focusing on new things. As such, it is still both ardent and necessary.

Punkt has always been built on a web of interdisciplinary activities spread over an easily walkable area in the town. This year's events, with its 17 concerts, took place at five neighboring places: Kristiansand Kunsthall; Musikkens Hus; Hotel Norge,; Kick Scene; and the big Fønix Kino Hall.

As usual also this year's Punkt was a combination of known and new faces and multinational voices from Norway, Denmark, Great Britain, the Netherlands, Germany, Switzerland, Austria, Italy, The United States and Australia. Among the new faces there were musicians who had worked with Punkt artists or at Punkt events in other places, such as drummers Hamid Drake and Samuel Rohrer, the string quartet Zapp 4 (Jeffrey Bruinsma, Jasper le Clercq, Oene Van Geel , Emile Visser) and saxophonist Rafaele Casarano. The notable young Norwegian label, Hubro, was represented prominently this year (Håkon Stene, sPace moNkey, Erik Honoré) alongside Norwegian labels Sofa and Gigafon, British label Touch, Danish label ILK and German Arjuna label, amongst others.

In the past, pioneers of the field Punkt has been derived from were invited and participated in various roles in the festival. Laurie Anderson's groundbreaking work and her multimedia-mediated storytelling has been highly influential for what ultimately emerged as Punkt ten years ago. Consequently, the two artistic directors of Punkt were utterly happy to finally announce Anderson's participation at this year's festival. For these pioneers— big names now and artists with strong musical identities—it is a real challenge to enter this festival's special field of forces, to engage and interact in it. So the festival directors were even happier when Anderson decided to invite one of Punkt's key musicians, Arve Henriksen, to join her for her Kristiansand performance on the last night of the festival.

A festival lives by the quality of its contrasts, oppositions—even confrontations or collisions—its tension curve and, of course, its highlights. There were more than enough contrasts. Last year's edition started with the pop band Mariam The Believer, featuring Swedish vocalist Mariam Wallentin, one-half of Swedish rock duo Wildbirds & Peacedrums. This year however, started with a musical realization of Samuel Beckett's 1984 text