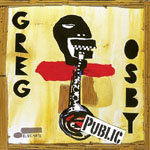 Over the past couple of years Blue Note has released live recordings such as On This Day at the Village Vanguard by saxophonist Joe Lovano and The Bandwagon by pianist Jason Moran. The trend continues with Public, the new release by alto saxophonist Greg Osby. A respected musician, bandleader, and innovator with a unique presence in terms of composition and style, Osby's alto voice is easily recognizable. But make no mistake about his music, which is progressive, cerebral, and challenging—warranting that repeated and deeper listens yield higher rewards.

Recorded at New York's Jazz Standard in January 2004, the live performance recalls Osby's band from his 2003 release St. Louis Shoes. Special guest appearances include the return of trumpeter Nicholas Payton and a special contribution from singer Joan Osborne. Much like his critically acclaimed live release Banned in New York, which was released in 1998, the concert is captured technically without the use of audio processing enhancements to create a more natural live sound.

Another comparison lies in Osby's recruitment of young and talented musicians. Drummer Rodney Green and bassist Robert Hurst uphold the all-important task of keeping the music tightly in check with engaging rhythm work while a new surprise to the band is the addition of pianist Megumi Yonezawa, who sounds very similar to another Osby protege, Jason Moran, with a percussive style and technique marked by flurried notes and rolling patterns.

The music is a mixture of classics and Osby originals. With a Thelonious Monk-like syncopation, the new piece "Rising Sun" is explored with a coolness that is typical of Osby's odd-metered compositions. The first notable item is the free piano work by pianist Yonezawa as she smoothly articulates a highly evolved solo. Osby later delivers his classic stiletto-honed alto soloing with the usual contrast of both fire and ice, announcing that this is not your run-of-the-mill jazz concert.

The live version of "Summer" introduces Payton's expert trumpet skills to the set with a brash and powerful solo that serves as a nice contrast to Osby's smooth lines. Osby again delivers a blistering solo that is supported by a funky backbeat. "Visitation" is an almost fourteen-minute journey that begins with a brooding and complex piano solo and then evolves into a more mellow swing pattern. Bebop is fiercely revisited on "Shaw Nuff " as the band simply burns the house down with rapid, declaring solos, supported yet again by smoldering drum and bass lines.

The closing highlight is a remake of the great Billy Holiday's "Lover Man," which is performed by singer Joan Osborne. Her reinterpretation of the classic is hauntingly convincing; her voice exudes an empathetic sadness. One might ask whether another live recording from a jazz artist is really needed, but unless you can witness the real thing in person, maybe going Public is the next best thing. Highly recommended.