By TROY COLLINS
September 25, 2006
Sign in to view read count 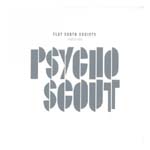 This Belgian big band has made quite a name for itself on the international underground scene. After touring with Mike Patton's postmodern metal band Fantomas, the group accrued some well deserved notoriety for its boundless spirit and unconventional outlook. While the members of the Flat Earth Society can readily ply pre-war 1940s big band charts with conviction and emotional commitment, they can also whip up a frenzy in the matter of such postmodern iconoclasts as John Zorn and Phillip Johnston.

With a cracked aesthetic residing somewhere between Carl Stalling, Raymond Scott and Frank Zappa, the FES projects an in-your-face attitude. Founding composer Peter Vermeersch, formerly the leader of experimental Knitting Factory favorite X-Legged Sally, has covered everything from Louis Armstrong to the Residents with this lineup, as well as performing film soundtrack work. Psychoscout finds them exploring a varied set of original tunes that never lack invention.

The melodramatic screams interwoven into the furious free bop of the noir apocalypse "Clusterthing" only begin to hint at the lunacy to come. "Hilton's Heaven" includes maniacal narration worthy of the surrealism of Fred Lane, and "Gulls and Buoys" blends vintage Henry Mancini with a powerhouse rhythm. "Edward, Why Don't You Play Some Blues" is an electric meltdown featuring the acidic skronk guitar of guest soloist Roland Vancampennout.

The title track is a blistering workout that defines the group's aesthetic, featuring contrapuntal horn charts, brassy fanfares, serpentine reeds, propulsive rhythms and boisterous solos. This is an acoustic big band with the energy of an electrified punk band. But much like punk, the group's enthusiasm and vigor is sonically accessible: it's never so extreme that it drifts into cacophonous excess.

"Lie To Me" and "Waterman" drop the energy level a notch, convincingly demonstrating the massive groups capacity for tenderness and lyricism, if only briefly. "Snaggletooth" is the inverse, a postmodern excursion into stylistic chameleonism, complete with modulated tempos, genre changes and extreme dynamic shifts in volume and density.

There are few contemporary ensembles in modern music that quite fit into the same category as this energetic and zany outfit. As unique and virtuosic as it is creative, the FES has a sure-fire winner with Psychoscout. Be sure to check your sonic inhibitions at the door.