By NORMAN WEINSTEIN
November 15, 2005
Sign in to view read count 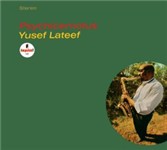 This is a welcome reissue of one of a series of fine Impulse! albums by multi-instrumentalist Yusef Lateef that have never taken their deserved place among the major recordings of the '60s. I suspect part of the reason for their neglect has to do with the image, helped by both the Impulse!, and later Atlantic labels, in portraying Lateef as a purveyor of hopelessly arcane musical exotica. The weird title of this album doesn't help any more than the 2005 front cover copy crowing about how this music is "mysterious and uncategorizable."

I find it nothing of the sort. Psychicemotus is quite available to any jazz fan with open ears, and unmysterious to anyone who can understand that African and Asian instruments and musical concepts have long been embraced and integrated into jazz by Lateef, who also has a long history in integrating R&B into jazz. Lateef's album is simply wildly eclectic and often driven by a variety of flutes.

He handles Erik Satie's "First Gymnopedie" with a devout classical tone that's faithful to the graceful meditative structure of the original. On the other hand, "Bamboo Flute Blues" has some unusual tones vocalized on a F pentatonic scale—called "primitive" in the original liner notes!—but the shape of the piece is derived from traditional New Orleans jazz and gospel. Workouts on tenor sax like "I'll Always Be In Love With You" have a gruff sweetness to them that makes Lateef fit nicely in the same musical universe as Sonny Rollins.

Much of the pleasure of this 1965 album is also derived from the superlative support given Lateef by bassist Reggie Workman, the obscure pianist George Arvanitas, and the amazingly underrated drummer James Black. The lightness and playfulness of the musical experimentation here is a massive contrast to much of what the Impulse! label was recording in the '60s, which serves as a reminder that new jazz then, as now, need not be darkly moody in order to make a mind and heart-expanding statement.

Psychicemotus; Bamboo Flute Blues; Semiocto; Why Do I Love You?; First Gymnopedie; Medula Sonata; I'll Always Be In Love With You; Ain't Misbehavin'.