By DOUG COLLETTE
February 24, 2019
Sign in to view read count 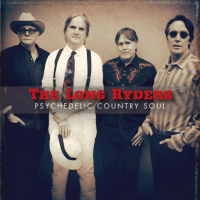 The Long Ryders remained on the periphery of the so-called Paisley Underground of the '80s, resting virtually alone in the "cowpunk" niche until Uncle Tupelo appeared in the next decade under the aegis of "alternative country." Shepherded by Coal Porters member and Million Dollar Bash author Sid Griffin, The Long Ryders have periodically regrouped for brief reunions over the years in response to fan demands, but Psychedelic Country Soul is their first studio album of new material since 1987, the result of a serendipitous and speedy sequence of events including basic work produced in Dr. Dre's studio by Ed Stasium (who has worked with The Ramones, Belinda Carlisle, and The Smithereens).

Comprised of eleven originals and a cover of the late Tom Petty's "Walls," this record is a valiant attempt to reclaim a prominent position in the evolution of rock's cross-pollination with country and western music. Interestingly enough, this release appears via Omnivore Recordings, a label usually devoted to reissues and archival work. Yet that move is in keeping with the band's devotion to traditional idioms, not to mention its loyalty to the adventurous rock of the '60s and its dyed-in-the-wool fan base.

The band's collective fire in the belly ignites fully on the fourth track, "All Aboard." The sing-song quality of the group vocals are effective here, while both the lead guitar fills and solos flash an intensity missing from the preceding cuts. Although the harmonica and vocal counterpoint on "Make It Real" is fairly potent, this track hearkens a bit too close to The Byrds in their later days; the chiming guitars could be more prevalent in order to resonate as deeply as they do on the Tom Petty cover, where a healthy detachment from the material lends an informality that benefits the foursome's playing and singing.

Perhaps some live dates prior to entering the studio would have loosened the band's collective muscle. The performance of "Greenville" would benefit from some abandon in order to alleviate both the stilted vocal delivery and predictable drumming. Along those same lines, the title of "Let It Fly" turns unfortunately ironic despite the winsome sound of The Bangles, whose vocal harmonies simultaneously loosen and sweeten the tone of the music. Spontaneous practice on stage could conceivably benefit even the acoustic approach of "If You Want to See Me Cry" and "Bells of August."

Greater spontaneity could certainly nurture the quartet's panache on electric instruments for "What The Eagle Sees." As with "California State Line," the Long Ryders sound a bit too correct for their own good (and thus somewhat joyless as a result). But that stodgy air dissipates through the lively changes and energetic performance of "The Sound" and, to a lesser extent, on "Psychedelic Country Soul," which counteracts any paint-by-numbers implications of this album's title.

Greenville; Let It Fly; Molly Somebody; All Aboard; Gonna Make It Real; If You Want To See Me Cry; What The Eagle Sees; California State Line; The Sound; Walls; Bells Of August; Psychedelic Country Soul.

About The Long Ryders