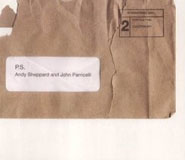 Sometimes artists are better known for the company they keep than their own work. Despite leading an active musical life with over ten releases as a leader, British saxophonist Andy Sheppard is likely best known to North American audiences for work with composer/pianist Carla Bley, like The Lost Chords Find Paolo Fresu (Watt, 2007). British guitarist John Parricelli has a very small discography as a leader—though the superb Alba (Provocateur, 2000) proves it's quality, not quantity, that counts—but is an active session player/sideman who is known for work with trumpeter/composer Kenny Wheeler on albums including It Takes Two! (Cam Jazz, 2006).

Sheppard and Parricelli have intersected in other contexts in the past, but P.S. brings them together on a series of intimate duets that cover broad territory, but focus heavily on lyricism and a gentle, easy-on-the-ears approach. With writing duties equally split between them, along with one collaborative composition, it's not about muscular chops—although both undeniably possess them. Instead, it's about opening a window into an introspective meeting that, for all its accessibility, isn't shy on substance. If the ultimate purpose of acquiring technique and musical knowledge is to allow musicians to forget about it all and just play, then Sheppard and Parricelli have clearly made the leap from formidable ability to sheer musicality.

Parricelli utilizes effects like looping, as well as the flexibility offered by studio overdubbing, but generally plays more organically than, say, Bill Frisell. He loops the foundation vamp of his dark "Say So," adding additional colors to build an ethereal soundscape, with a more edgy tone doubling Sheppard's tenor for the song's lengthy theme. Parricelli's solo doesn't start until halfway through the seven-minute piece, but when it does, it's the definition of spare economy. Parricelli switches to nylon-string acoustic guitar for his Latin-esque "Reverie" which, along with a layered electric solo, becomes a feature for Sheppard, demonstrating his similar attention to space, tone and detail.

Parricelli's "Glencarron" is a steel-string acoustic guitar and soprano saxophone duet that approaches the Midwestern vibe of Pat Metheny's New Chautauqua (ECM, 1979), but with a lilt that can only come from the British Isles. A firm contrast to the acoustic, unadorned and non-overdubbed "Glencarron" is Sheppard's "Les Mains D'Alice." The saxophonist is back on tenor for a haunting, rubato tone poem, where Parricelli creates lush chordal swells with his volume pedal, delay and reverb. It's surprisingly reminiscent of the ambience of British singer/songwriter John Martyn's "Hurt in Your Heart," from his classic Grace & Danger (Island, 1980). The saxophonist's "He Stood in His House and He Wondered" follows in similar sonic territory, with Parricelli creating a deep pedal tone drone, but on a more overtly electronic landscape, with an ever-increasing series of loops that support Sheppard's lithe and supple melodicism.

The beautiful P.S. expands well beyond mainstream jazz, but despite its breadth of texture and approach, it's still an album about improvisation and intimate interaction, suggesting that these two artists, in fine and simpatico form, deserve far greater international recognition.

Visit Andy Sheppard and John Parricelli on the web.