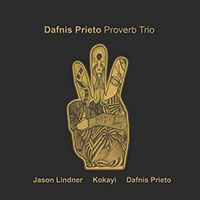 Walking a tightrope without a safety net is what Proverb Trio is all about. The recording was entirely improvised, and recorded in six hours by percussionist/composer Dafnis Prieto , keyboardist Jason Lindner and Grammy-nominated vocalist/emcee Kokayi (Carl Walker), who have performed together since 2009. Prieto—a one-time member of reedman Henry Threadgill's Make a Move and Zooid ensembles—is a 2011 MacArthur Fellowship recipient and a discernible voice known for his passion and technique on his own recordings, including About The Monk's (Zoho, 2005) and Live at Jazz Standard NYC (Dafnison Music, 2009).

Proverb Trio's eleven tracks are inventive playgrounds, starting with the positive vibrations of "Into The Light Love," which is triangulated by Lindner's synthesized musings, Kokayi's soulful mixture of lyrics and poetry, and Prieto's explosive beats. The landscape covers the funky and suggestive "You Got It," where Kokayi vocalizes street poetry and hip hop flavors, to the digital synth-tones and lyrics lamenting Earth's ecological woes in "What Have We All Done." It's more than a blowout session, as Prieto comments, "We're creating songs, not sprawling jams, but concise structures and infectious grooves created collectively."

The improvisations also result in powerful imagery. "In War" is a stunning example, where Lindner's classical theme is juxtaposed against a militaristic drum march and Kokayi's words speak a tale of tin soldiers and the consequences of real-life warfare. "Talking Too Much," on the other hand, is propelled by a feverish rhythm, Edgar Winter Frankenstein-Moog keyboards and Kokayi's playful banter. The "Mystery Man" is one of two instrumentals where the drums and keyboards travel to distant solar systems. But "Mother Nature" returns to earth as Prieto's percussion dances like a Cuban street performance and Lindner repeats a hypnotic quirky vamp.

Labeling this music is of least importance. What's relevant is how the trio creates magic; the power to pull something out of thin air and produce stimulating music.

Into The Light Love; You And Me; The Magic Danzonete; Extasis; You Got It; In War; Vamos a Jugar; Talking Too Much; What Have We All Done; Dirty Us; Mother Nature.