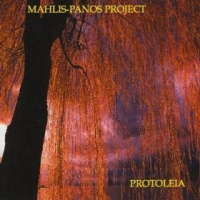 Incorporation of non-traditional instruments into jazz can produce mixed results. It takes a gifted player to either apply jazz traditions to an unusual instrument or in reverse integrate the traditions and unique sounds of an instrument with the structures and conventions of jazz. In the wrong hands, or deployed for the sake of exoticism, the effect can be trite; when done properly, the outcome can open up new horizons. With Protoleia, the Mahlis-Panos Project accomplishes the latter, using oud, drums and bass to combine musical traditions to impressive effect.

An ancient instrument dating back at least 5,000 years and originating in the Middle East, the oud has a rich history, particularly in Iraq, where its stature is an integral part of the nation's cultural identity. A fretless ancestor of the guitar, it is both flexible and possessed of a distinctively emotive acoustic. On Protoleia, Dimitri Mahlis takes full advantage of these characteristics to introduce a compelling atmosphere of intricate designs, shifting rhythms, and filigreed compositions. Certainly, not every tune on the album hits this mark, with some feeling directionless or lackluster. But the majority present a welcome melding of jazz's rhythmic drive and more esoteric lineages with Middle Eastern traditions, many of which, in fact, informed some of jazz's early departures to begin with.

Particularly effective are the title track, on which Dan Lutz's bass work stands out; the contemplative "Sunday's Proposal"; the kinetic "Dimi's Kurdi," which showcases the oud's capacities; and "Thalassa, which evolves in a slow, supple resplendence.

Built around the oud's unique sound, Protoleia undulates with an inviting, sensual sound. From its first notes, it's an immediate invitation into a sumptuous musical world that proceeds to successfully draw together multiple musical strands, creating a satisfying, absorbing experience.