By DAN BILAWSKY
August 2, 2014
Sign in to view read count 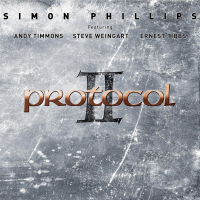 Protocol II arrives fourteen years after drummer Simon Phillips' last leader date—the hard bop and post-bop based Vantage Point (Jazzline Records, 2000). And it comes approximately a quarter century after the original Protocol (Music for Nations, 1988)—a true solo date that had Phillips covering all the instruments, filling in the space around his calling-card drumming.

So why the long wait for another solo album? That question is pretty simple to answer: Phillips wasn't thrilled with much of the writing he had been doing during that span of time. He was also plenty busy with other work, hitting the studio with various artists, pleasing pop fans through his ongoing work with Toto, and giving jazz fans his all in a trio with pianist Hiromi and bassist Anthony Jackson, so there was no reason to put something out there if he wasn't ready. When he finally got the itch to make his own record again, and felt he had material worth using, he put together a band with two longtime musical colleagues—guitarist Andy Timmons and keyboardist Steve Weingart—and bassist Ernest Tibbs, a monster player he knew but never worked with. Phillips then booked some studio time and sent everybody some demos of fully fleshed-out songs and shorter ideas. His plan was to collaboratively piece together the material in the studio, and that's the way it went.

Phillips' instrumental DIY approach on the original Protocol made some of the instrumental work seem like window dressing for his drumming, but that's never the case on this one. All four men tear it up as equals, walking the progressive fusion-y path together as one. Those who simply want to witness Phillips' chops-laden soloing get their wish. He throws down during the sinister "Wildfire," gets his shots in during "Gemini," shreds on the brief "Octopia," and unleashes himself over a vamp on the album-ending "Enigma." But the menu has more than drum solos. Straight up groove work, chilled-out atmospheric material with blues-tinged guitar ("First Orbit"), rip-roaring thrill rides ("Upside In Downside Up") and more await. Yes, the material has some of that fusion excess and studio slickness to it, but a little excess never hurt anybody. Phillips has been silent as a leader for far too long, so it's nice to see him back in the saddle, putting his incredible skills to use in his own name.