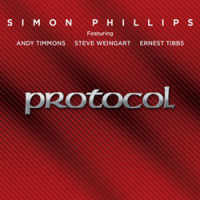 A professional musician from the age of 12, Simon Phillips' drumming sound and style is instantly recognizable. He's toured and recorded with just about every major rock and pop act imaginable; from Mick Jagger, The Who and Toto to Judas Priest, Mike Oldfield, and Joe Satriani. Also an uber-session player, he's recorded countless jazz, fusion and progressive rock sessions with lesser-known, highly-gifted artists such as Duncan Browne, Gary Boyle, Phil Manzanera, and Ray Russell. Lately, he's turned increasing attention to production, sound engineering, and his own burgeoning solo career. Though his website lists 9 albums as a leader (or co-leader) there are several others out there, including two by the co-operative band RMS (with Russell and Mo Foster), and 21 Spices (Art of Groove / MIG Records, 2011) with Trilok Gurtu and the NDR Big Band.

Despite the hundreds of recordings he's been on, and the dozens of amazing musicians he's worked with, Phillips' collaboration with superstar guitarist Jeff Beck continues to be a defining moment in his career. From Steve Weingart's atmospherically orchestral keyboard swells to Andy Timmons' gritty, blues-saturated guitar style and Phillips' own penchant for odd time signatures and exotic percussion sounds, El Becko's influence looms large on Protocol 3. And that's a good thing, because Protocol 3 is easily one of the year's most exciting jazz-rock recordings. Though Phillips dabbled in the smooth jazz arena during the 1990s, those tendencies have completely disappeared from his music. The eight tunes are a diverse and creative lot, all written or co-written by Phillips and his bandmates. The playing is, as you'd expect, fantastic throughout. Polished, but with just enough filth.

"Narmada" rides a danceable bhangra groove from start to finish, as Timmons' solo completely opens the George Benson chakra. "Imaginary Ways" swings artfully between mellow moody blues and proto-metal heaviness. Here, Timmons' guitar phrasing and Weingart's very chill Rhodes work conjure Beck's collaboration with Jan Hammer. The anthemic "Outlaw," heavier still, reminds me of something Hammer said during a DownBeat Blindfold Test: ..."this is rock-jazz, not jazz-rock." The band shows their versatility on "You Can't But You Can," getting truly funky in the tradition of Billy Cobham's first few solo albums, or Herbie Hancock's recordings with the Headhunters. That said, it seems Mr. Phillips has also picked up a few licks from Ahmir Questlove Thompson. The opening drum solo on "Undercover" has Tony Williams written all over it, while the rest of the tune is a truly aggressive, multi-sectioned jazz-rock barnburner with fantastic solos by Timmons and Weingart. The highlight of Protocol 3, however, is "Circle Seven," a truly gorgeous tune co-written by Weingart and Phillips that would have you thinking that the 20-teens are truly the halcyon days of jazz-rock. More great solos, more drumming thrills, but it's Ernest Tibbs' bass work that carries the day here.

Protocol 3 is real-deal jazz rock. No avant-garde trappings, smooth jazz noodling or proggy pretensions (well, maybe a little bit of the latter) here. This one left me with a smile on my face every time I listened to it.