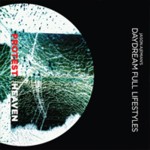 Bassist Jason Ajemian assembled a company of improvisers in December, 2006 at Heaven Gallery in Chicago as part of a music series he had been curating since 2002. The assemblage named Jason Ajemian's Daydream Full Lifestyles contained the infamous Chicago Underground players Rob Mazurek (trumpet), Chad Taylor (drums) and Jeff Parker (guitar), plus the well-traveled Tony Malaby (tenor saxophone), Ajemian's mentor from his university days.

The result is heard here in a limited edition 180g vinyl release (also available as MP3). This is not the concert in its entirety, but carefully elected sections, with pieces rearranged for album flow. As this is fully improvised sound, the reconstruction is an additional rephrasing by Ajemian and gives the music more of a composed feel.

The bassist first caught listeners attention in the bands Triage (with Dave Rempis and Tim Daisy) and Dragons 1976 (with Aram Shelton and Daisy) and has since been heard with Mazurek in Mandarin Movie and Exploding Star Orchestra with Bill Dixon, just a few of nearly 20 bands of which he is a member. His debut recording The Art Of Dying (Delmark, 2008) made multiple "best of" lists.

The music, although improvised has a choreographed texture. That's attributable to the players, whose purpose is to make music. Grandstanding is not heard here. The players maintain an agreeable posture throughout. For example, on "Light Up," a short blues ramble, Jeff Parker is disposed to support a line, Tony Malaby follows and Chad Taylor adds accents. The band is satisfied to keep tension to a minimum, and the lack of that tension/release formula makes these improvised pieces quite special. The surprise comes in the edit, where on two tracks, the music cuts off in midstream as a shock to the ears.

Mazurek's trumpet and Malaby's saxophone are conversant and comfortable here. The longest track is "Animal, Big Tree & River Steam" at 13:31 it is a meandering river of a song, that passes through several different systems of turbulence and calmness, arriving at an affable and simpatico destination.

Still Building Your Life on Fear; Your Concrete; Get Mine; Stock Pile; Light Up; No Dark; Let Live; Animal, Big Tree & River Steam.