By EDWARD BLANCO
November 12, 2013
Sign in to view read count 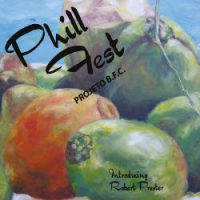 Living in the South Florida area for over a decade now, guitarist Phill Fest rolls out a recording of Brazilian-style modern jazz dedicated to the strong ties that make Florida and Brazil so special to the development of his personal and professional musical career. Projeto B.F.C. (Project Brazil-Florida Connection) celebrates the proud Fest family tradition in the world of Brazilian music where father Manfredo Fest forged his connection to the bossa nova and samba jazz as keyboardist to the Bossa Rio group and opening act for Sergio Mendes and Brazil 66. The legendary pianist passed away in 1999 in Tampa while son Phill—who relocated to Florida in 2001—has been performing his style of modern Brazilian jazz primarily in South Florida ever since.

The album opens and closes ("B.F.C. Is Coming" and "Ate Mais") with brief African-influenced fast-paced Brazilian percussions provided by Brazilian drummer Ronie Martinez. However, the meat of the disc truly begins with the Fest original "Florianopolis" highlighting classically-trained pianist Robert Prester as well as the leader on lead. Pianist Kenny Drew, Jr. paid homage to Manfredo Fest on the same album where he also tips his hat to Key West with his original "Samba de Cayo Hueso" and on this rendition, Fest includes the great Brazilian harmonica specialist Hendrik Meurkens on the first of his several guest appearances.

Featuring overdubbed acoustic guitars and Fest's vocal chorus, composer James Liberato's "Baiao da Amizade" highlights a festive up beat string-laden Brazilian number where long-time colleague Russ Howard weighs in with strong currents on the bass. Pianist Prester contributes a couple of defining pieces to the project: notably, the samba-drenched "Island of Guizar" and the light "Commonwealth Ave." Picking the guitar strings with a taste of class, Fest draws on the first of his father's compositions leading the music on "Clearwater Sunset" with Meurkens not far behind on a gem of a piece. Manfredo Fest's two other compositions included here are "Bossa Blues #2" and the carnival-like "Dig This Samba" where the band plays like the main act of an exotic Brazilian carnival show, letting it all hang out with fire and spice.

Phill Fest continues the family's involvement in playing the bossa nova and samba music that had so captured the creative interest of his father and plays such an important role in his own life today. The emergence of the impressive and highly entertaining Projeto B.F.C., can only help to elevate his stature as a strong and innovative voice within the landscape of Brazilian jazz. As a talented guitarist who incorporates a virtuoso classical technique on the strings, some may wish to draw comparisons to the great Brazilian guitarist Baden Powell, except that Fest's own preference is for a more modern approach, distinguishing himself from the master as evidenced by the fresh and creative sound so well delivered here. In all, the superb music of Projeto B.F.C. does far more in defining guitarist Fest than paying tribute to the existing B.F.C. connection.