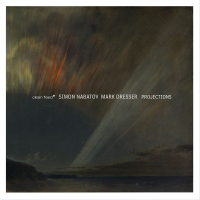 Projections captures an improvised duo encounter between émigré Russian pianist Simon Nabatov and Californian bassist Mark Dresser. Although they first played together as part of German composer Klaus Konig's Orchestra in 1992, it's taken until now for their first head to head. Both are masters of their respective instruments, articulate, persuasive and responsive. They come together in a busy, volatile set recorded live in 2014 at the Loft in Nabatov's adopted hometown of Cologne. The result is a dazzling series of interactions which can change within the space of a few seconds from warm and tender to austere and alien.

Dresser commands a range of tone and texture unmatched by any of his peers except perhaps Barry Guy, manifest in rapid-fire switches between bow and fingers and between registers from delicate koto like plucks to a growling bottom end. Slurred vocal inflections vie with pure toned classical lines as he roams freely across the fretboard. His partnership with self styled hyper pianist Denman Maroney leads one to ask whether the bassist gravitates towards those who modify their piano for alternative sounds, or does he attract them?

Certainly on this session Nabatov majors on piano preparations in contrast to some of his other dates (such as his garrulous duets with trombonist Nils Wogram). Gambits such as rolling balls on the strings add a random element, while he dampens the hammers elsewhere to extract gamelan sonorities. There's no respite to his imagination on the keyboard, where the torrent of notes emanating from each hand suggests he almost has too much to say.

Happy synchronicities mean that two such voices in full spate create much more than the sum of their parts With no melody or regular time, the music is percussive rather than rhythmic—the prancing staccato section in "Pliant Giant" provides a case in point. But episodes of spare reflection appear interspersed through the program, as in "Cîtara XL" where the unconventional jostles with the more expected.

Dresser's introduction to "Aria Attack" includes whistling arco wails and groans, building up to an intense exchange. But a restless energy dictates that no matter what they move on quickly to new ideas (as in the Morse code passage in jerky explosive "Parting Shots") an indication perhaps that much remains for this pairing to investigate.