By WOODROW WILKINS
March 31, 2009
Sign in to view read count 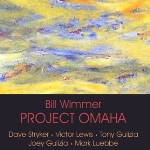 There are times when the sum of its parts is the heart of an ensemble. Project Omaha, by saxophonist Bill Wimmer, is a perfect example.

Though categorized as a solo effort, this is a group outing in the finest sense. The title is also the name given to the band that's comprised of Wimmer, Dave Stryker on guitar, Tony Gulizia on keyboards and vocals, Mark Luebbe on bass, Joey Gulizia on percussion and Victor Lewis on drums.

A percussive beat opens "Soy Califa," a Dexter Gordon piece. Wimmer and Stryker perform a duet during the song's opening theme. Then Wimmer solos while the other members of the ensemble deliver some riveting background sounds. Each instrument figures prominently at one time or another. Stryker follows with a solo, with the rest of the group still engaged but softer. The intensity picks up when the piano takes over. Then it's all stop while the drums and percussion enjoy conversation.

"Rhyne, Rhythm and Song" is a moderately paced romantic piece. Stryker answers Wimmer's lead during the opening sequence, followed by sax solos where, as before, the background instruments are very prominent. Lewis is particularly effective, punctuating certain phrases with emphatic beats on the snare or rolls on the cymbals. The organ underscores Stryker's solo.

Wimmer turns to the soprano saxophone for "Geo Rose," one of the longer, more elegant selections. The haunting melody is shared by sax and guitar. Lewis' cymbal spray and the sound of steel pans add to the song's appeal. Tony Gulizia sings on several tracks. His voice brings to mind a touch of Kurt Elling and Joe Williams, with a hint of Mel Tormé.

One of the striking things about this set is the total band involvement. Regardless of who has the lead, those in the background consistently show their individuality while maintaining a strong sense of togetherness. Recorded live at Kelly Liken in Vail, Colorado, Project Omaha offers plenty of opportunity for these musicians to shine. And shine they do.

Soy Califa; I Thought About You; Rhyne, Rhythm and Song; She Was Too Good to Me; Geo Rose; Dreamer/Felicidade; Gypsy Blue; Cherry Red; Carnaval.